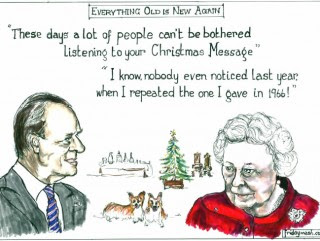 In the United Kingdom and in other countries with an attachment to the British Commonwealth, it is a custom to hear the Queen’s annual Christmas message.
The FIRST Royal Christmas message was broadcast in 1932 by King George V, at the insistence of Sir John Reith to introduce the Empire Service (now known as the BBC World Service). The king was most reluctant to deliver a message on the ‘wireless’ but addressed his subjects in a speech written by his friend, author Rudyard Kipling. And so began an annual event … I have been watching the second series of The Crown and discovered that in 1956 for the first time ( and only time) , Queen Elizabeth II and Prince Philip broadcast separate Christmas messages. Prince Philip was away at the time on the Royal Yacht Britannia touring the Commonwealth, and delivered his Christmas message from there. The Queen, spending Chtistmas with the family at Sandringham House, not only delivered her prepared speech but responded to the Prince’s speech with a personal message
Her message to Philip was: “From all the members of the family gathered here today our very best good wishes go out to you and to everyone on board Britannia, as you voyage together in the far Southern seas. Happy Christmas from us all.”
Queen Elizabeth broadcast her first Christmas message in 1952 and the 1956 one was the last on radio. In 1957, the Royal Christmas message was telecast for the first time. She was anxious about her first televised broadcast . The microphone  was concealed  behind  sprigs of holly but  the queen’s nervously clasped and unclasped hands  were visible.
Author Daphne du Maurier prepared draft suggestions to help her, and BBC announcer Sylvia Peters gave her a tutorial on the “five best ways to make a speech on TV”, but in the end the final draft was Prince Philip’s.
She reportedly  said to one of her staff after the first telecast : “I hope your Christmas went off well. Ours was upset by the television, which was nerve-racking.”
Note : There were only three years when there have been no Christmas messages from the reigning monarch .... 1936 when Edward VIII abdicated in December, reigning less than a year, 1938 - (no recorded reason) and in 1969 when a documentary about the Royal Family was released  and the investiture of Prince Charles as the Prince of Wales took place. A reassurance was made by the Queen that the Christmas messages would resume in 1970... will you watch the Royal message this Christmas?
Sources :
http://mentalfloss.com/article/23497/6-christmas-firsts
http://www.radiotimes.com/news/on-demand/2017-12-08/best-christmas-tv-shows-netflix/
http://www.fridaymash.com/politicians/prince-philip