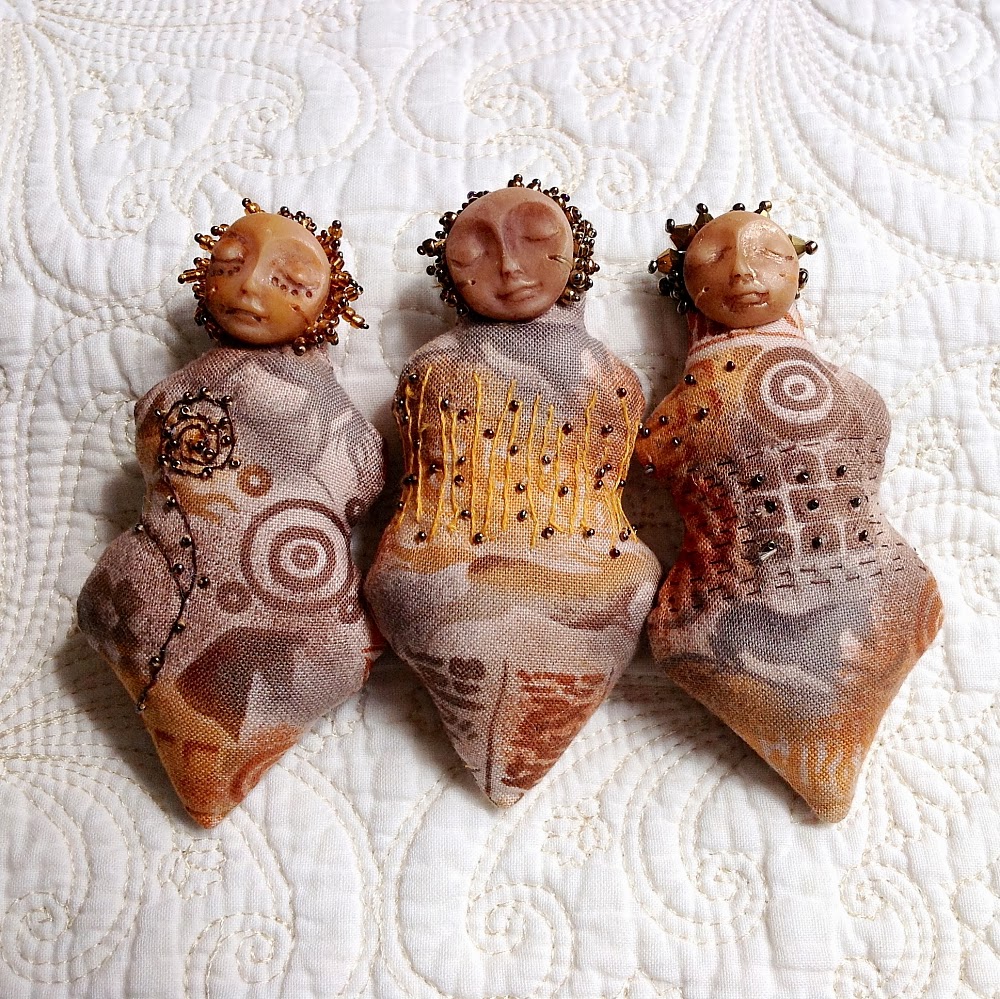 This week, I finally put the finishing stitches to these little dolls which have been on my work table for some time. You will see that for most of them I used fabric with a horse motif. These were all meant to be ready  for the beginning of the Chinese New Year  "Year of the Horse"  ... 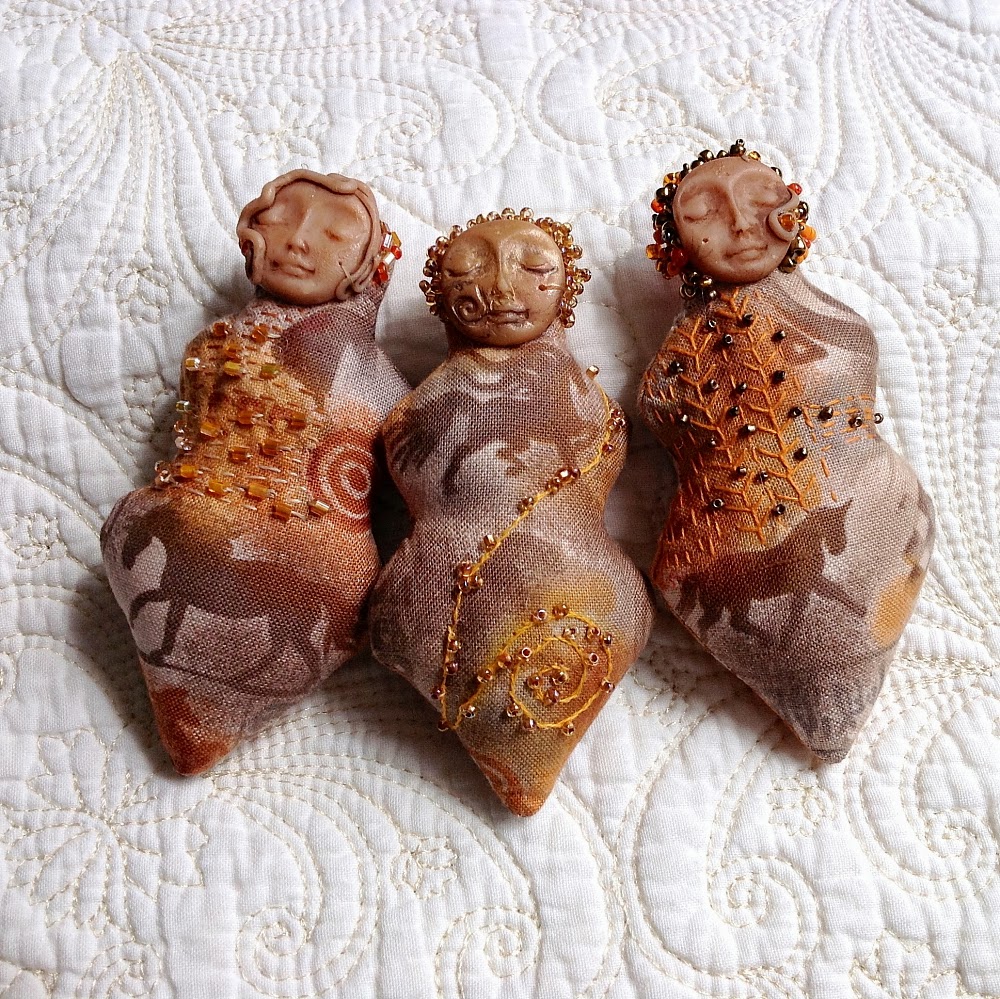 Here is the basic process I've used for making these  ....

Do you think these are divas? goddesses? or sages? Or do you have another suggestion?
Posted by Wilma Simmons (Empress Wu Designs) at 1:25 PM 2 comments:

The term "billy tea"refers to tea brewed in a billy can, that is a small can, tin or pot used on a camp fire for boiling water/tea.  So the term "billy up to the fire" basically means, "put the kettle on". And for real billy tea, the addition of a few eucalypt leaves is  the ingredient which makes a difference.  The billy tea  from "Waltzing Matilda" seems a long way away from the story of the origin of the tea, but the scene of a man alone with his thoughts under a tree seems familiar. The  tea legend goes something like this....
Around 2700 BC, the Chinese Emperor Shen Nung, a renowned herbalist, was meditating under a tree while he was waiting for "his billy to boil". .A couple of leaves from a nearby shrub blew into the water without him noticing. When he tasted the resulting brew, he was really amazed by the delightful new taste, and the beverage of tea was born.

Time for a cuppa billy tea? ( Billy Tea is a trademark brand of tea leaves and tea bags.) 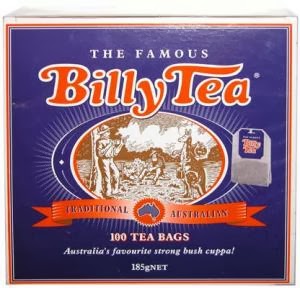 Posted by Wilma Simmons (Empress Wu Designs) at 9:58 AM No comments: 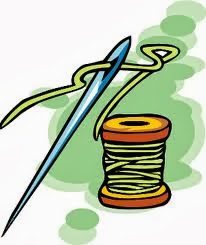 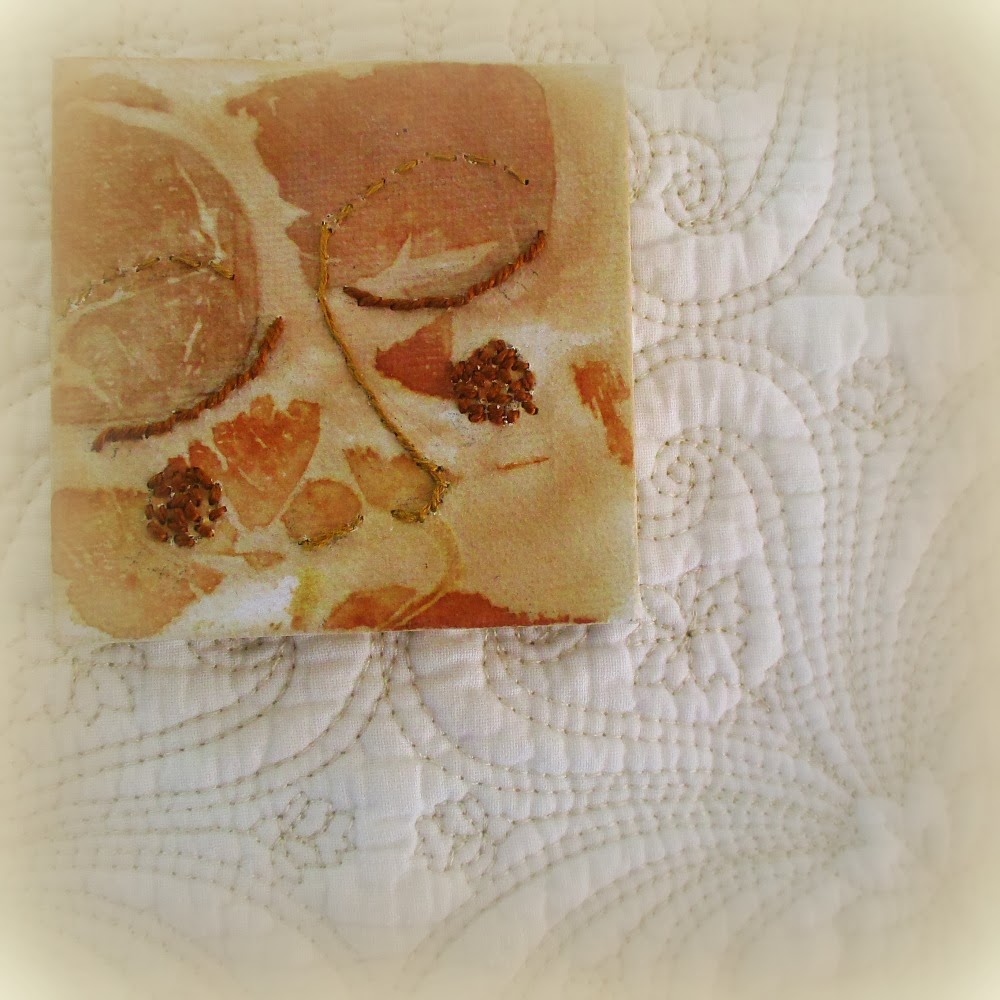 Tea on Thursday is becoming Tea on Friday ... but here is number 4 in my preparation for my exhibition later in the year. These are just  small experimental works. Plop your used tea bags , still wet, onto a canvas either stretched or a canvas sheet, Let the tea bags do their work, and remove them  in a few hours - 24 hours is even better. Work with the pattern. You could enhance the pattern with paint, pencils, felt tip pens . In this one, I did some simple embroidery stitches to create "Wistful".

Posted by Wilma Simmons (Empress Wu Designs) at 10:17 AM No comments:

Out of the Red 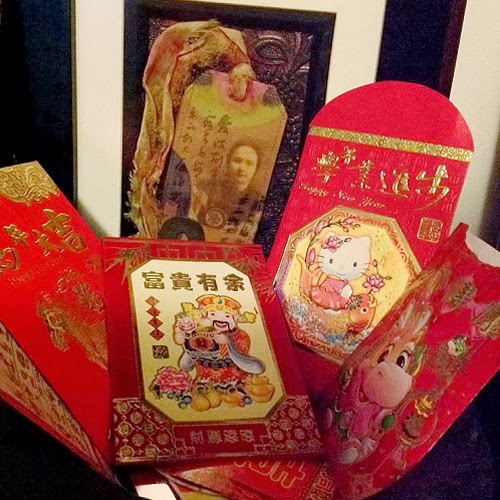 In our family, children love red envelopes. They signify special occasions, usually a party, and gifts of money. We have just celebrated the beginning of the Chinese New Year, the Year of the Horse, with the consumption of amazing amounts of delicious food, mah jong challenges for all ages, and with the giving of red envelopes - lai see ( in Cantonese) and hong bao ( in Mandarin) which contained "lucky" money. 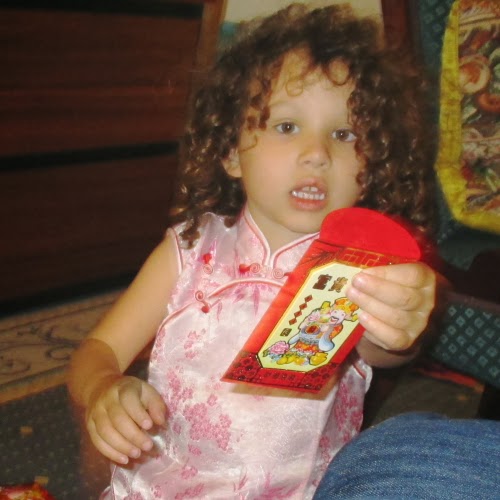 Tradition suggests that on auspicious occasions like the lunar new year  and weddings, money in the red envelopes  means blessings and  good luck bestowed on the young by the older generation (the unmarried by the married)  and on the bride and groom by the guests. Some employees are also lucky enough to receive red envelopes from their bosses. It is also a happy custom to give red envelopes of money for special services given like Chinese lion dancers in a new year's performance. 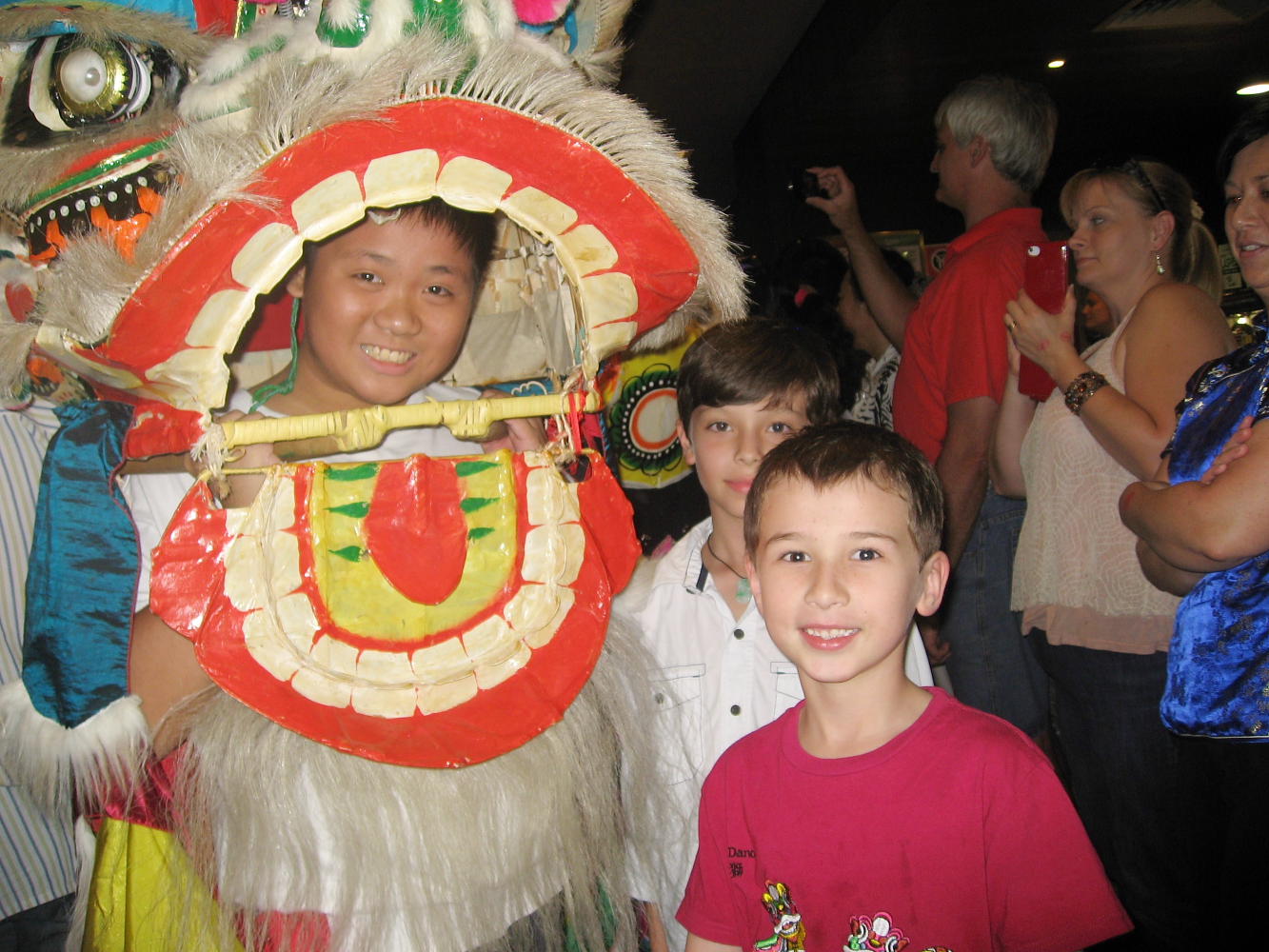 Always red, the colour of good luck, the lai see (hong bao) are often gaudily decorated with  lots of gold and other bright colours. I have even seen some with colourful images of Disney characters and comical versions of ancient gods and classical figures. It is even  fun to make your own with templates now readily online. 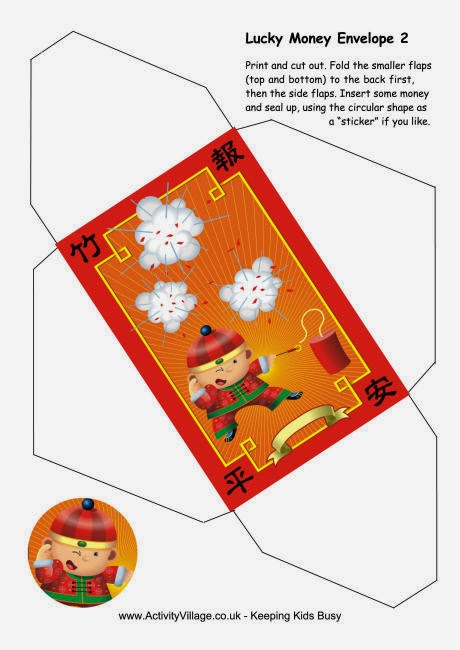 In our red envelopes, we put gold coins in an even number as an odd number is usually associated with funerals. However, I believe that crisp new notes are considered better luck, and certainly for weddings, it is not so obvious how much is given if the money is of the folding variety. The grandchildren in our family are very happy with coins, and they love it when I include a couple of coins from another country.They even like a couple of chocolate coins as part of the offering. These red envelopes are always offered with both hands and received by both hands. 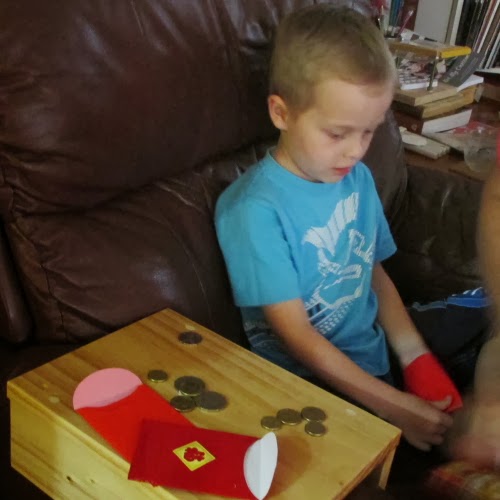 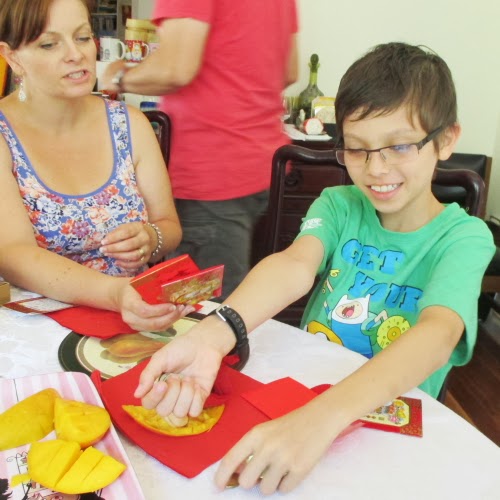 Where did this custom of giving red envelopes come from? While there is no literary evidence to prove one theory or another, I like the story  that the use of  the colour red comes from the time when people used to paste red paper couplets on their front doors to chase away Nien , the ferocious beast which allegedly ate people on New Year's Eve. This developed into the practice of weaving red ribbons or string around coins as "warding off evil spirits money" - often one hundred coins woven in the shape of a dragon. Then with the popularity of the printing press, this practice became red envelopes and paper money. 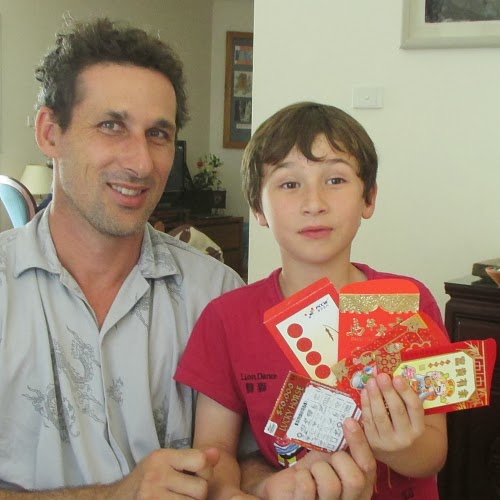 Whether or not our grandchildren really understand the significance of the lai see (hong bao), they do recognize that this is a Chinese tradition and part of their heritage. It is a very easy custom to maintain, and  the red envelopes themselves have become a symbol of unity and continuity of culture. 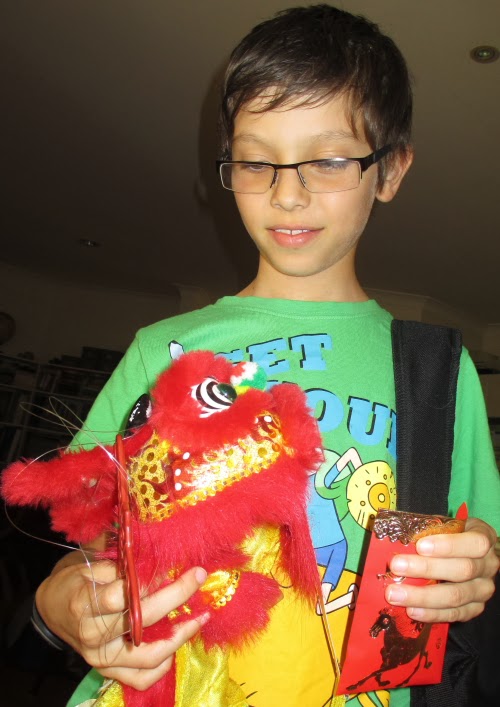