Last weekend, I was very privileged to do a workshop with Belgium based artist, Jette Clover.  One of Jette's series of small works features postage stamps of famous people, so after the workshop I rediscovered my stash of stamps ( most of them still attached to envelopes). Fortunately for me, this fortnight's Tag Tuesday theme is " The Beach" which seems to be recurring theme for Australian stamps.  These collage tags have been assembled from torn bits of painted paper, magazine pages and stamps. I have called these tags "Winter Beach" as  the beach still looks as bright and the water as blue even  in winter here in Newcastle. Today's  winter maximum temperature was 16 degrees C with a clear blue sky and warm sunshine.

Stitched Up is an exhibition featuring 24 contemporary international and national textile artists on show at The Lock Up from Friday 23 June 2017 until 6 August 2017. It coincides with the 150-year anniversary of The Newcastle Industrial School’s opening; and is resulting from a partnership between The Lock Up and Timeless Textiles galleries. Stitched Up is co-curated by Anne Kempton (Creative Director Timeless Textiles Gallery) and fibre artist Wilma Simmons, both from Newcastle NSW. .
This exhibition conceptually provides a voice for the 193 girls who attended the Newcastle Industrial School, translated into contemporary fibre art.
The title Stitched Up is very apt in two ways…
Firstly, each of the artworks has been stitched – mostly by hand for many hours – capturing the story of ‘The Girls’. The artists have found themselves dwelling on the stories of these sometimes short lives, capturing the sense of being lost, homeless, not being heard or seen, and belonging to an underclass with no voice.
Additionally, the colloquial meanings of Stitched Up refer to the girls’ lives. Being sent to the Newcastle Industrial School or Reformatory was not one of choice. It was an arrangement approved of and implemented according to government mandate of the time. The girls’ family backgrounds and life circumstances ensured that they could be found guilty of a “crime” leading to their internment at the school.
The Newcastle Industrial School and Reformatory for Girls (established in 1867) was a NSW Government response to the passing of the Act for the Relief of Destitute Children in 1866.This occurred during the “Gold Rush Generation’ in Australia, a time of great societal upheaval. With a huge and ongoing influx of immigrants, it was an era of poverty, hardship and discrimination.
Children were particularly vulnerable, living in slums, with limited care or supervision, often finding themselves homeless. Survival put these children at great risk of exploitation by thieves and pimps. Child prostitution, violence, drunkenness and sexual abuse were commonplace in marginalised groups.
Under the provisions of the Act, children under 16 years of age could be taken from their families if they were arrested for a crime; in the care of thieves or prostitutes; or if they were destitute or found wandering the streets with ‘no lawful occupation’.
Between 1867 and 1871, 193 girls were sent to the Newcastle Industrial School and Reformatory (previously military barracks). Besides basic literacy, the girls were taught stitching. They were set to work sewing clothing and household items as a cost recovery exercise. The mandatory stay at the school was 12 months, with the prospect of being apprenticed.
The initial concept for the ‘Stitched Up’ project came from a chance discovery that some of the girls had been detained in the Newcastle lock up after short-lived escapes from the school. Following a meeting with the Coal River Working Party and discussions with Dr Ann Hardy, the project was launched .
Having met with local historian, Jane Ison, Anne and Wilma were immediately captivated by the life stories of the young girls of the Newcastle Industrial School. The research and writings of Jane Ison and subsequently Canberra based anthropologist, David Eastburn and Bernadette Sheahan have inspired this project to engage worldwide interest in this fascinating part of Newcastle’s history.
The materials used throughout Stitched Up reflect the cloth and colourways that would have been used by the girls to make functional items during their time at the school.
‘Stitched Up’ presents an extraordinary array of artistic works individually and collectively portraying stories of loss, betrayal, cruelty

Some of these items would have been used, reused and recreated. They would have been held, sometimes for long periods of time, in both the girls’ and the artists’ hands during the making process.

From small and intricate works of art to larger scale works, the contributing fibre artists have honoured the lives of 193 girls, lived and lost. They have been given a voice through a range of fibre art practices – creating, for example, a large quilt as a comforter; dolls to compensate for lost childhood; weaving together lives; mending stories through stitch; and creating collages by layering memories and history.
Adding further dimension and community participation in the project, 30 women from The Wednesday Maker’s group at Timeless Textiles Gallery stitched embroidered narratives of each of the girls’ lives, working for nine months on the project and resulting in seven volumes of cloth books, each page dedicated to one of the girls or a family of sisters. The stitchers used Jane Ison’s research to inspire their stitched interpretations and have developed a respectful and close relationship with their chosen girls.
Moved by the life stories of the girls, Irish-born writer and poet, Anne Casey contributed a range of poems supporting Jane Theau's artwork including Cross-stitched:
Cross-stitched
Intertwining threads
Mirror images repeated over and over
Weaving in and out of each other
Twisted tales of
Cast-off shreds
Crisscrossing
Stitched together
And ripped apart
Slowly unravelling
Into so many missing parts
Disappeared
Like stitches dissolved
From long-forgotten wounds
Their memories marked
By the palest
Of gossamer scars
(Anne Casey 2017)
Posted by Wilma Simmons (Empress Wu Designs) at 9:50 PM No comments: 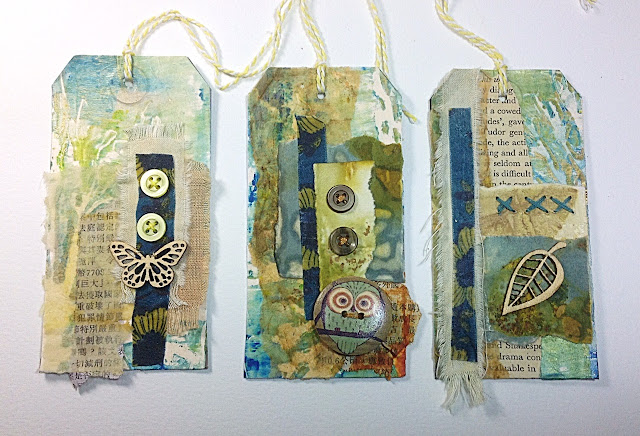 Having neglected Tag Tuesday for a month, I am making a comeback with a trio of tags for the current theme, selected by Wendy from the Design Team - please have a look at  the textural tags created by  the artistic friends at Tag Tuesday. Here are my three....

I had actually started a tag for the previous"Animals" theme, and it is also textured with stitch, so I don't feel too bad about also including in this post.

Wednesday's Children Are Stitched Up 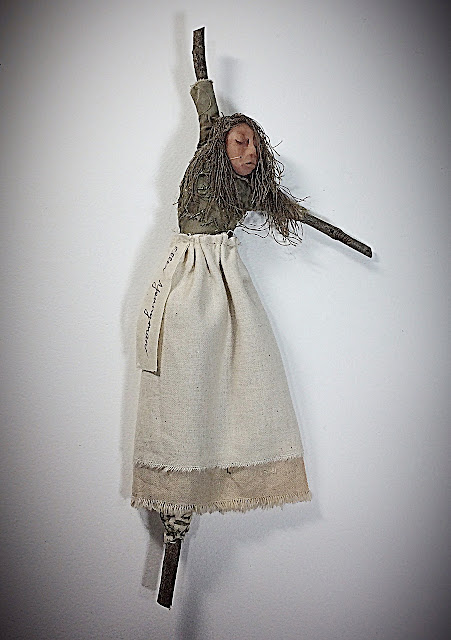 Neglecting my blog in the last month was one of the sacrifices I made for Wednesday's Children. Just a recap since it's been such a long time since I mentioned them.  Here is my submission for the exhibition "Stitched Up" - bringing to life the girls who were  placed in care at the Newcastle Industrial School 1867-71. I have now created 193 art dolls, made from sticks and strips of cloth.


Wednesday’s child is full of woe (from a nursery rhyme c.1838)
The stories of each of the girls in the Newcastle Industrial School and Reformatory   have been r researched by local historian, Jane Ison. Each story captured my heart....
Stick dolls seemed an appropriate way for me to honour the life of each of these girls and to compensate for lost childhoods.  I like to think if they had the opportunity they might have made little dolls from found materials - sticks and scraps of fabric, just as I enjoy making them 150 years later. These dolls are artistic representations and are not intended to be accurate or lifelike depictions of the girls.  In the installation, there are 193 stick “figures” wrapped in layers of cloth and individually stitched and sculpted Their different sizes and shapes draw attention to their individuality. Some have their hands ‘tied’ (knotted cloth), others have their arms raised in defiance (natural fork in a branch)  or hanging loosely in quiet resignation. (thin branches).The  polymer clay faces are individually sculpted to convey some of the sadness and misfortune  of the girls’ lives. 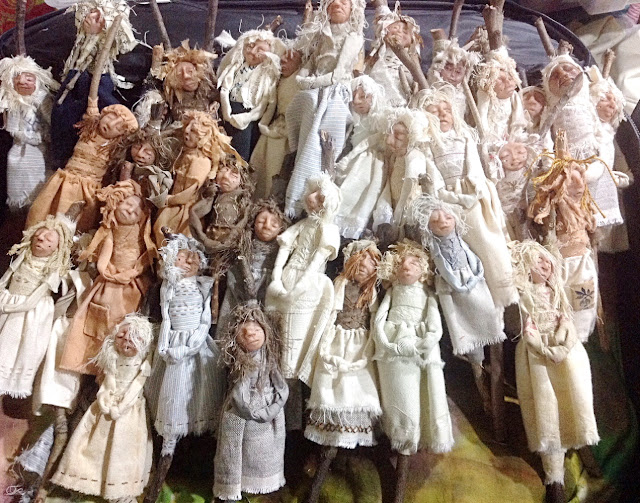 In a previous post, I said  that this post would focus on how  the arms are made, so if you have been following the posts in this series, you have a set of mini-tutorials so you can create your own stick doll. 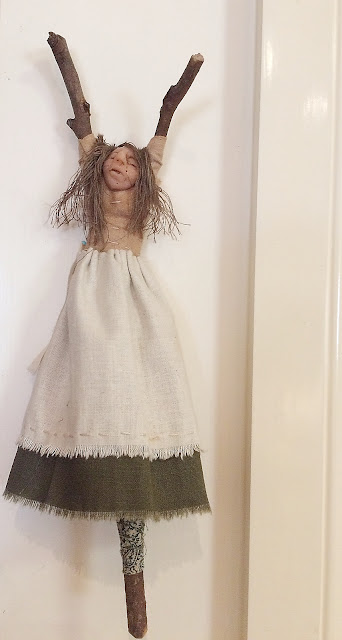 1. The easiest way to improvise arms on a stick doll is to choose a suitable branch. In the group I made, I wanted to portray the defiant behaviour of some of the girls... The natural fork of a branch  to me was the shape of  arms held up in protest  by the escapees from the institution. 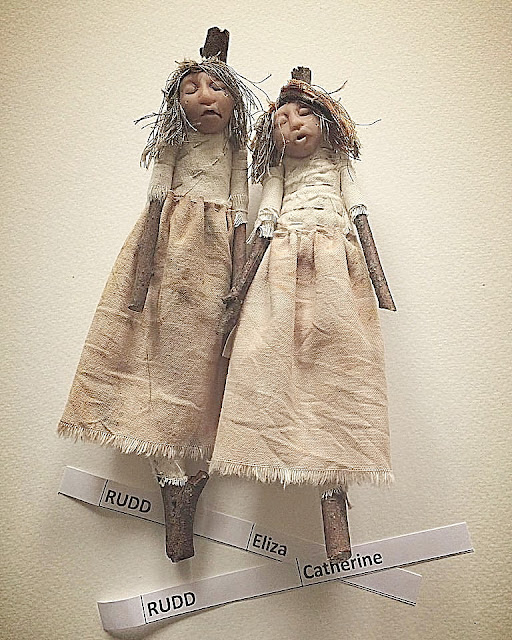 2. The next easy way is to choose two small twigs and wrap them in cloth, and stitch them into place . These straight stick arms I think suited the girls who were compliant or had  learnt to tolerate their fate. 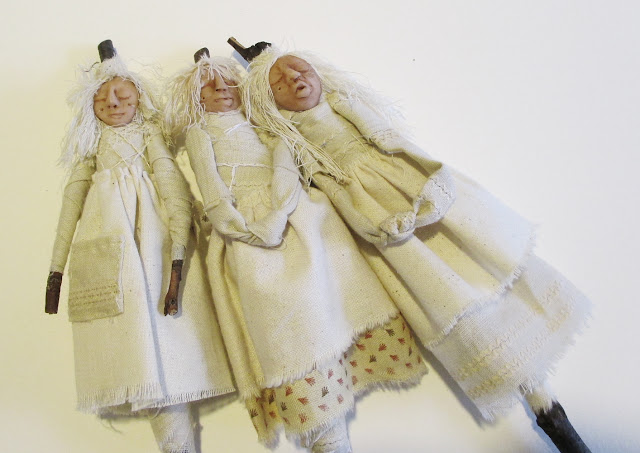 3. For many of the dolls in this installation, I wanted to show that these girls were not only 'stitched up' but  were defenceless and unprotected  - their 'hands were tied'.... hence the arms and hands are strips of  knotted cloth. I also improvised a sleeve from the same piece of fabric. 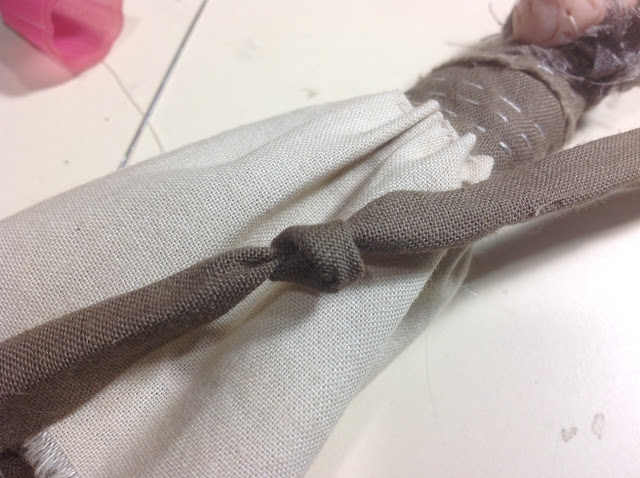 Step 2 ; Tie a know in the middle of the strip - these are the improvised hands. 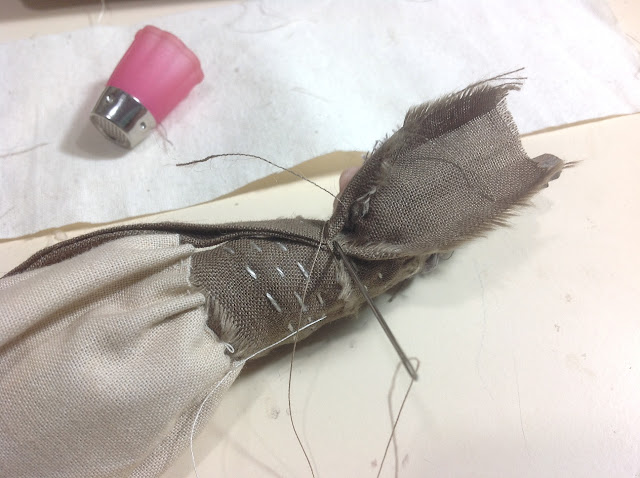