The work for the "Stitched Up " Project  continues. See the previous "Wednesday Child" post for the background to this art project celebrating the 150th anniversary of the Newcastle Industrial School.
I have been documenting the progress of my work, so I thought it might be interesting to share some of the early stages of the "stick dolls" ... Here are some of the beginning steps..

Follow this series of blog posts - Wednesday's child - for the later stages of these dolls and more about the work in progress.
Posted by Wilma Simmons (Empress Wu Designs) at 7:47 AM No comments:

Everyone is a Winner! 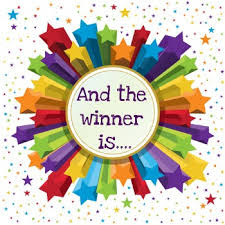 Today, the winner of the art tag giveaway was decided....
There were only 4 entries in this giveaway - a little disappointing for me but good for the four participants. Thank you Michele S, Gamarna, Annie Trish and Narelle for entering . This is how the draw was done. I put the four names on separate pieces of paper and folded them and put them in a jar. My husband Jim who is very trustworthy was given the task of pulling the first name from the jar and then the second....
THE FIRST WINNER IS MICHELE S!
THE SECOND WINNER IS NARELLE!

And because there were so few entries, I have decided to send Annie Trish and Gamarna a consolation prize of two tags each from the same series.
I hope you will all like your prizes. Please contact me with your postal addresses. 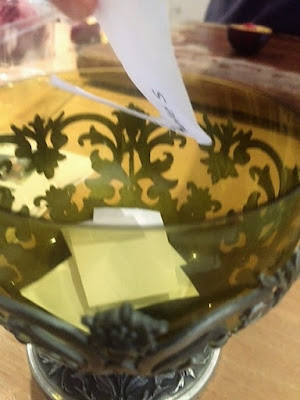 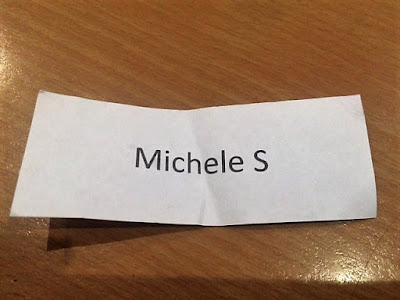 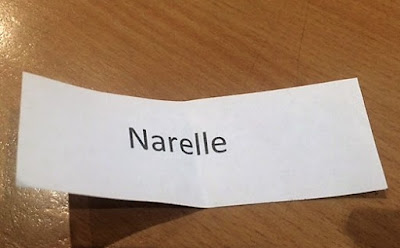 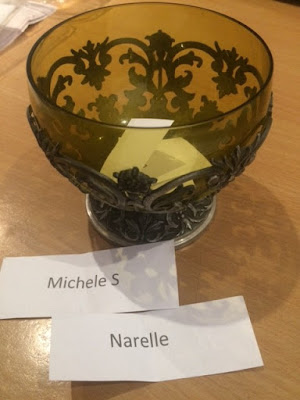 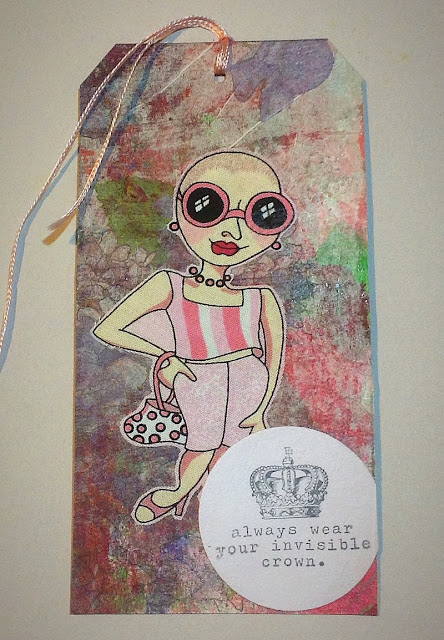 "Always Wear Your Invisible Crown" ...
Tag Tuesday this fortnight is hosted by Michele whose blog is "art from the well". Michele set the theme " Hats and Headgear" I am dedicating these tags  to all who are currently undergoing treatment for cancer.  I got my inspiration from an event held  here in Newcastle, (NSW Australia). The annual event is called "Bald and Beautiful" which is a special day of pampering, laughter and joy for cancer survivors and current sufferers. 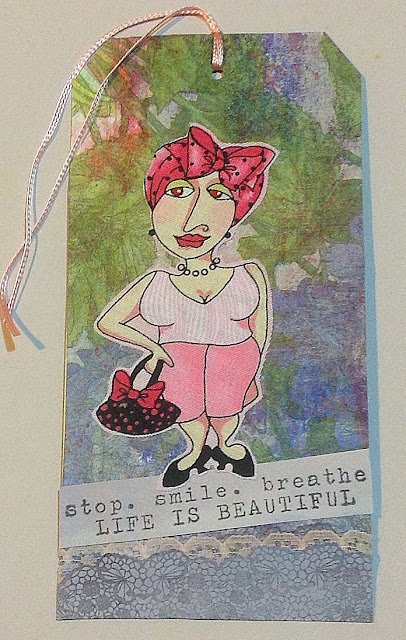 All of these tags are made from  motifs from a printed fabric, generously given to me by a friend,  The backgrounds are from scrap painted paper with a overlay of paper serviette. 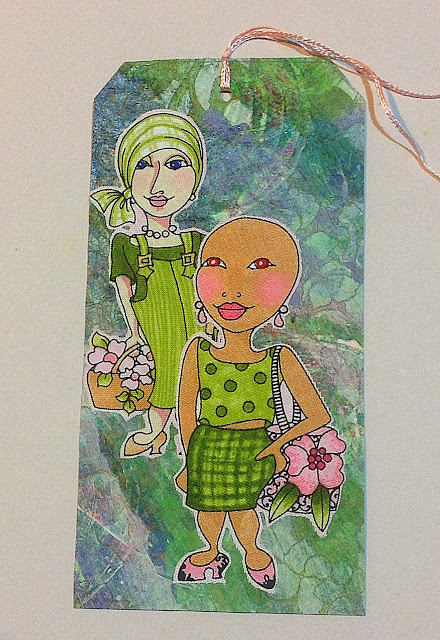 Visit TAG TUESDAY to see all the tags from participants worldwide.
Posted by Wilma Simmons (Empress Wu Designs) at 11:36 PM No comments: 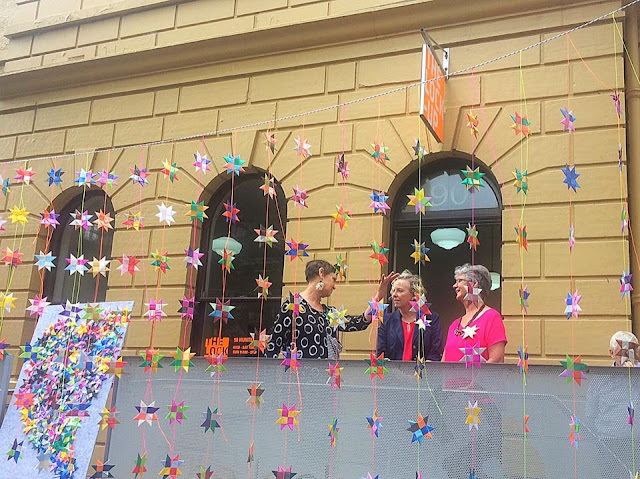 It has become a tradition in Newcastle ( NSW Australia) that International Women's Day is celebrated in style at  Timeless Textiles Gallery , with a message of peace, community and compassion and  a public stand against violence. Over the  years, we have made artistic fabric birds to raise funds for women's refuges; stitched 500 metres of white ribbon to raise funds for the anti-violence organisation, White Ribbon;  held free community workshops to create a huge fabric footpath mural; stitched prayer flags to support a women's project in India  and made a giant bird which was auctioned to supply tertiary education to underprivileged women in Nepal. 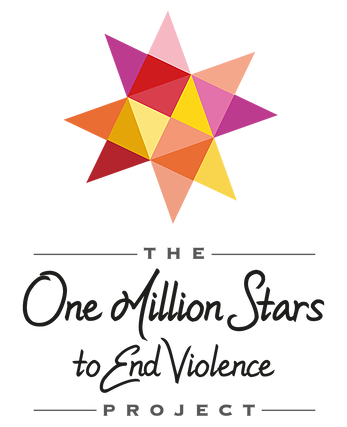 This year, 2017  the focus  at Timeless Textiles was again strengthening a community against violence - the One Million Stars to End Violence Project. Thanks to Anne Kempton, gallerist and the Newcastle Star Weave community , today's event was truly a celebration of all that 2017 International Women's Day stands for -  "Be Bold for Change " - creating a world of equality, gender parity and peace.

The "One Million Stars to End Violence"project began as a personal response by  weaver Maryann Talia Pau to the horrifying rape and murder of a young woman in her community in Victoria.  Maryann was inspired by these words :

and sent out a Facebook message to the world to join her in weaving a million stars by 2018. This is Maryann's message :
"To me, one million stars represents how monumental the task of ending violence is and that everyone needs to participate to end all forms of violence. Each star represents a person’s commitment to practise light, hope, courage and solidarity and the one million star installation will be a peaceful statement against all forms of violence in our communities."
The one million stars will be a shimmering, bright installation at the 2018 Commonwealth Games, held on the Gold Coast, Queensland as a part of the vision of the Commonwealth Games program to build and support sustainable and peaceful communities worldwide.  As leader of this global project, Maryann has been travelling to Commonwealth countries in the lead up to 2018 Games, connecting with communities and teaching weaving workshop with this message of peace.  What an inspiration!
Just as inspiring is the  Newcastle Star Weave community, a small group of committed people who  have been teaching many others over the last  year  to weave the stars with a target of 10,000 stars to be completed by International Women's Day. The goal was achieved well before today, and these stars will become part of the one million. What a visible reminder that we can all achieve a dream together. Thank you to all involved - the power of each one of you offers hope to the world.
Happy International Women's Day!

I have been informed that many of you have been trying to leave a comment, but have not been able to - so to make life easier, I will also accept as an entry  a comment on either of the blog posts, on  my Facebook page event  or on one of the Facebook  posts about the giveaway. Apologies, I can;t make it any easier than this ...   If you like one of these sets of art tags, I hope you are able to add you name to the entries somehow.

As a gift to the many people who followed the 29 Faces series last month, here is a thank you giveaway. You can win either Art Tag Set 1 -  "Seasons"  or  Art Tag Set 2 - "In Harmony.", as pictured. Each set comprises 4 small art tags  which have a bakers twine tie and and are blank on the back for your own message. The tags measure 10cm x 5cm (4in x 2in) and are suitable for gift tags, or for you to use in your own art journals or collages.
The two winners will be chosen at random at 12 noon, Tuesday 14 March ( Australian Eastern Summer Time)..All you need to do is to leave a comment in the section below - with your name.  I am not asking you to provide your contact details  at this stage to ensure your privacy and safety.  However, the winners will be notified only via a reply to your comment,in a blog post and on my Facebook page by 1 pm on 14 March. You will need to check if you are a winner and then contact me and  provide your address by Tuesday 21 March  to receive your art tag set.
This giveaway is open to anyone living in any country  to which a delivery from Australia Post can be made, except for any of my relatives. The tags will be posted to the winners by the most inexpensive service as a gift.
Be in it to win it! .
1.  Add a comment in the section below  OR on my Facebook page event
2. Check if you are winner from 1pm Australian Eastern Summer Time, 14 March  ( check a reply to your comment, check this blog or on Facebook
3. Claim your prize.
Posted by Wilma Simmons (Empress Wu Designs) at 7:51 PM No comments: 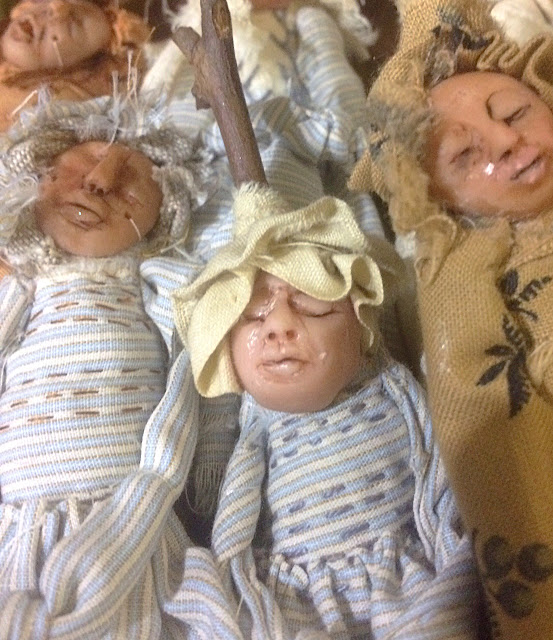 Wednesday's child is full of woe....
As on ongoing blog story, I will tell you about the many Wednesday children who were "housed" in the Industrial School in Newcastle , NSW, Australia between 1867 - 1871 and how their stories are being retold this year  to mark 150 years since this school began.

The Project
The art project is called "Stitched Up" and I am very fortunate to be co-curating this project which has three parts 1) Textile Art Exhibition of 25 artists' responses to the girls' stories  2) Community Art program - stitching a fabric book about the girls  and 3)  a performance  and photographic art work  of first person narrations.

My Contribution
As one of the 25 artists, I am working on an installation of 193 stick dolls, representing the inmates of the Industrial School and the Reformatory School. The technique is similar to   the way  dolls were made with few resources in 1800's ( a stick and some wrapped scraps) and most of the girls are depicted with their "hands tied" - symbolising their predicament.