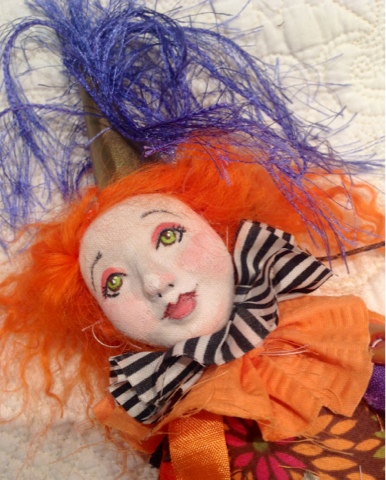 My little doll has arrived home. Thank you Ayala Art and Lulus Apples for working on her.
A vision of colour and flowers - did we name her? What about 'Marigold ' ? 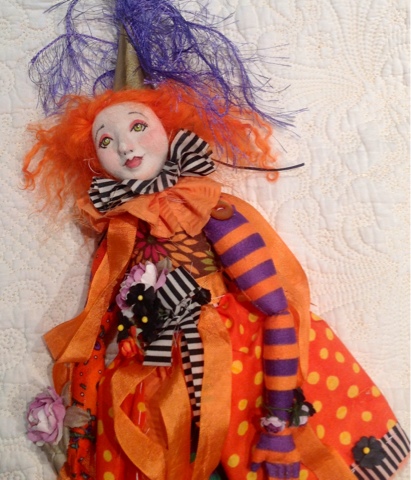 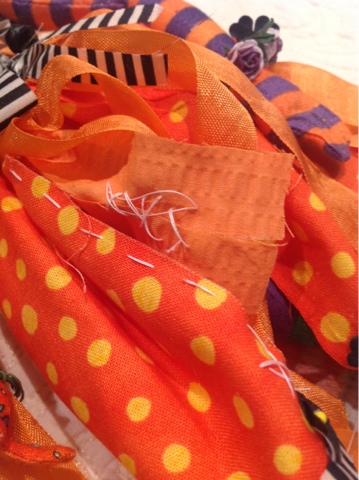 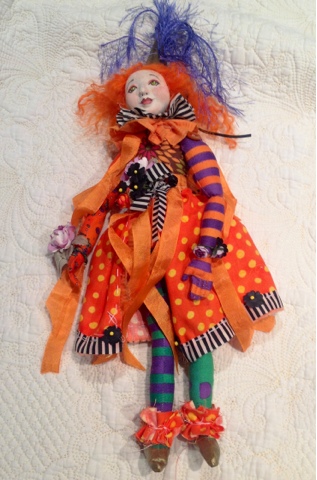 This is how I sent her off to California... 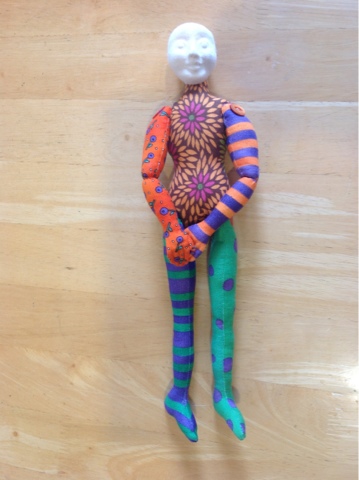 Then Lulu worked on her ...for the full story - look here 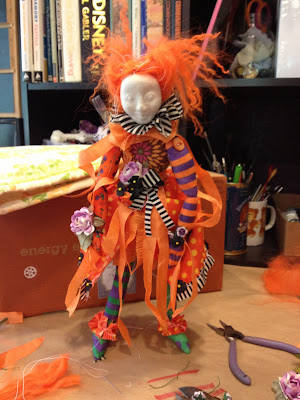 And then off to another part of California to Martha . The details of her adventures with Martha  and other traveling art dolls are documented here . 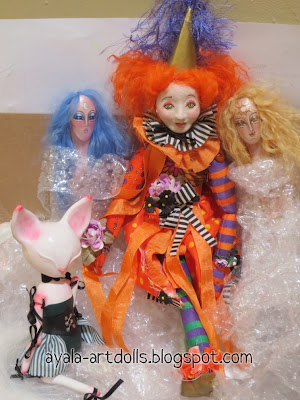 Just as reminder - here are the two dolls I worked on  - Lulu , Martha and I were the Tiny Team! 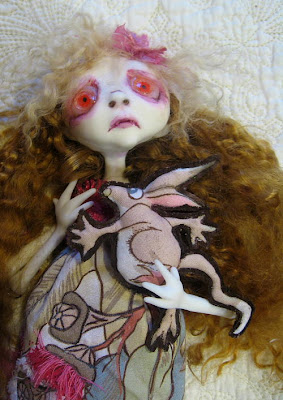 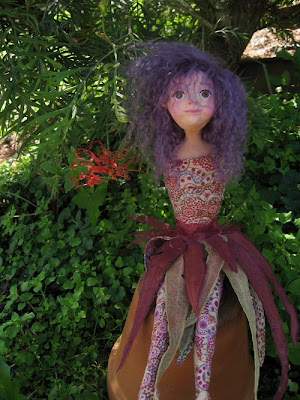 The Traveling Art Doll was an Art Dolls Only  Members' event. However, each month, there is an open challenge  and all doll makers worldwide are encouraged to enter.
Thanks again to the talented members of the team - your work is much appreciated!
Posted by Wilma Simmons (Empress Wu Designs) at 2:26 PM 2 comments:


Every tea towel might tell a story, but nothing rhymes with 'tea towel'  - is this true?
There is a lot of interesting information surrounding the humble tea towel ... The name 'tea towel' originates from early 19th century Victorian England. The tea towel was the linen of choice for Victorian ladies who liked its absorbent, fine weave soft linen fibres. They deemed it ideal to dry their expensive and delicate china, glassware, and serving pieces without scratching or leaving surface lint. A popular Victorian pastime was to embroider personalised tea towels which were used at tea time to cover food, to wrap around the outside of the teapot (tea cosy), and to take care of any spills....During the early 20th century , American housewives showed great ingenuity by transforming empty animal feed cotton into dish towels( tea towels). The feed sacks  were cut into suitably sized pieces of material, and the women would embroider intricate designs onto plain cotton to give them a decorative and feminine look. The coarse cotton weave of the feed sacks was more difficult to embroider than the finer weave of linen, nonetheless embroidery was decoratively applied .
( from http://www.all-tea-towels.co.uk )
Only a couple of days ago, I was reminded about the practice of embroidering tea towels. My mother and her two friends, for quite a few years, set themselves a collaborative challenge of embroidering the linen tea towels released by the Country Womens' Association (CWA) as part of their annual cultural studies.
These tea towels have been transformed into works of art... 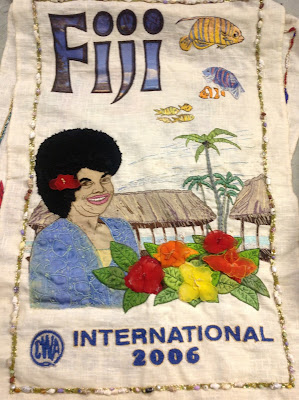 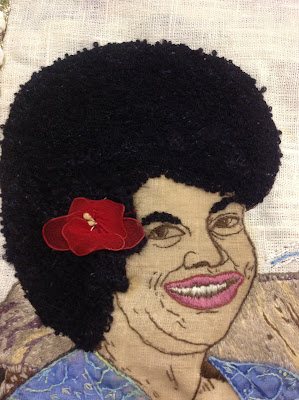 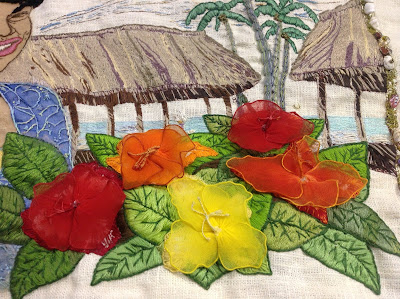 These tea towels started with commercially printed outlines and then were hand embroidered, appliqued and embelllished  by these three embroiderers who collaborated on the design, divided up the work, handing the tea towel on from one to another. 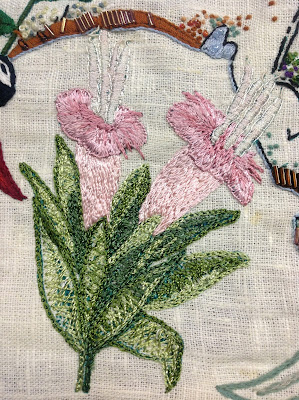 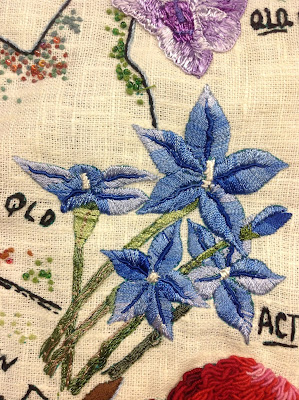 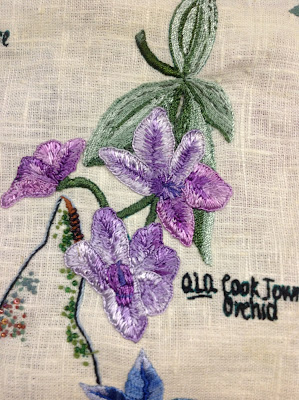 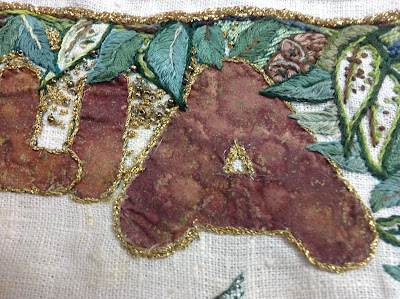 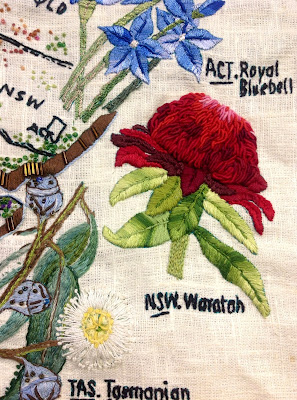 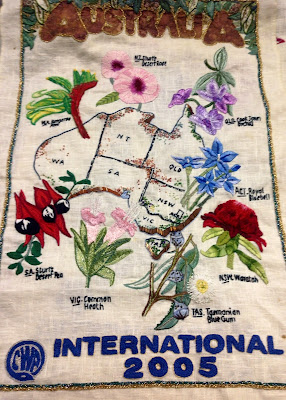 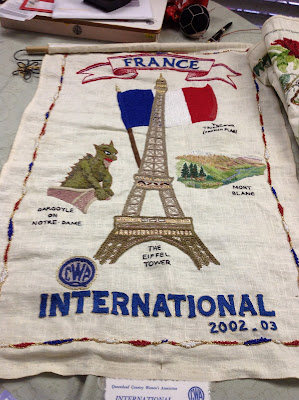 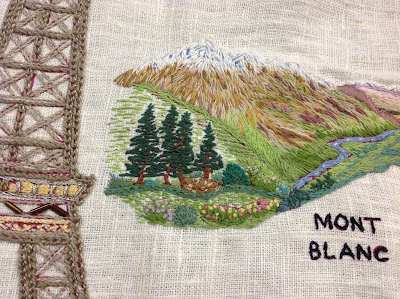 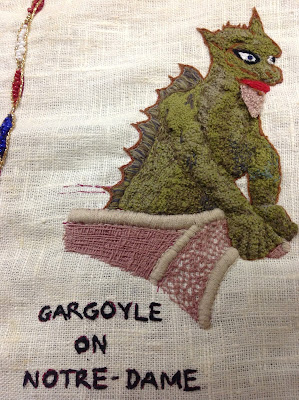 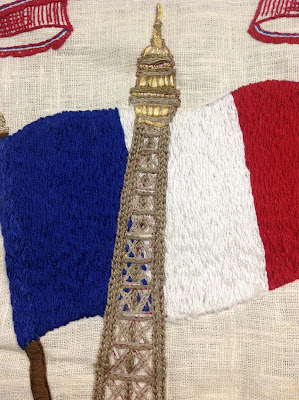 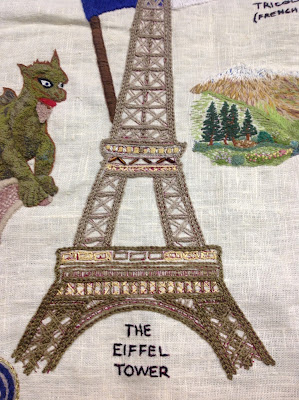 While a lot of the embroidery  on these tea towels may be considered traditional, there are also many contemporary techniques used to achieve desired effects, textures and dimension. 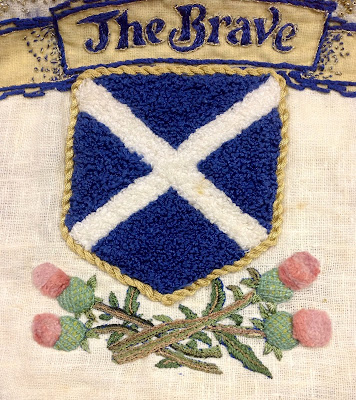 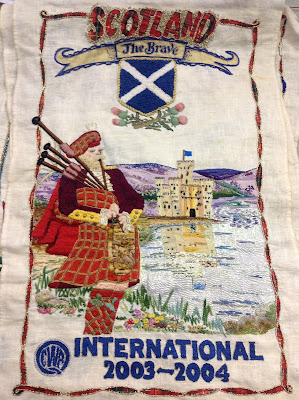 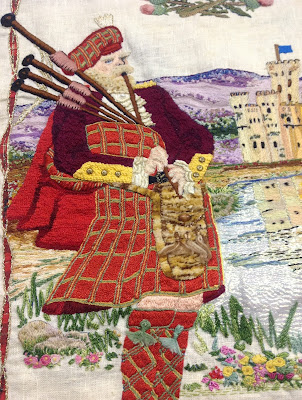 These beautifully worked tea towels won competitions some years ago, but  are now  usually hidden from view in storage  This week, I was very lucky to see them and  I  relished  the opportunity to take these photos. Congratulations Joyce, Nola and Hannah - these are really creative textile art works you can be very proud to display. Happy Mothers Day!
Posted by Wilma Simmons (Empress Wu Designs) at 10:25 PM 1 comment:


Today was the deadline for a publicity photograph for an exhibition I will be having in July 2014.  It seems such a long time away but with this week's deadline,  I have been thinking about the preparation required for an exhibition.

I have been very naive about preparing for exhibitions. After the first one I had in 2012, I feel I know a little more, but am always seeking good advice. I found this article very useful . I used the headings  from this article to put together a plan for myself.

1: Objectives and expectations
There are many reasons for staging a solo show. I need to  be clear in my  own mind what I'm  hoping to achieve from it. Be realistic about what to expect from it.

2: “Gallery” Space
I am very fortunate to know my gallery space, Timeless Textiles  which has published a guide for exhibitors. All I need to do is follow the guidelines and deadlines.
- location?
- clientele?
- costs?
- opening times?
- previous exhibitions?
- exhibiton checklist with timeframe
3: Costs
The most difficult part of the process for me is the pricing, so I will seek advice on this.  - gallery hire?
- advertisting?
- framing?
- transport ?
- photography?
- advice on pricing?
4: Create
My plan involves creating a number of works per month. The theme and concept have already been completed.  - theme?
- drawings/plan
- range of work?

Now... back to my work area to try to meet some of those deadlines!
Posted by Wilma Simmons (Empress Wu Designs) at 3:53 PM 1 comment: