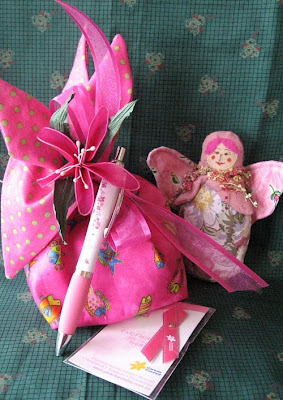 Today, 26 October, is Pink Ribbon Day. We started the morning at the community centre with my Rotary club, the Rotary Club of Wallsend-Maryland, and cooked pink pancakes and bacon and eggs (their natural colour) at a fundraising breakfast for Breast Cancer Research. I also bought a couple of items of pink merchandise to support the cause. The pink ribbon and pen are part of this week’s blog giveaway. It’s a pink parcel – a pink fabric bag, made from a Laurel Burch print, a beautiful flower made by my mum, one of our Rotary club’s angels of hope and the pen and ribbon. There may be some other little pink surprises which I may add during the week. All you have to do to win this prize is leave a comment, either about Pink Ribbon Day or one of the photos in this blog post. I will put all the names in a container and draw one next Monday, 2 November, 9am Australian Eastern Summer Time.

The photos are of things I’ve finished this week. The beaded doll was started ages ago, before I went to Papua New Guinea, and I only picked it up again this week to finish the few rows of beading at the base. The “forest messenger” doll was merely a scrumble, and polymer clay head lying amongst all the other unfinished projects on my work table, so I took both and put them together. 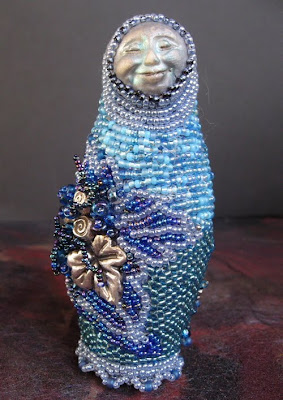 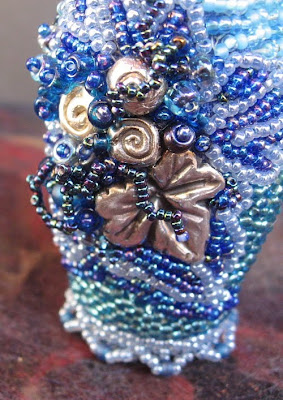 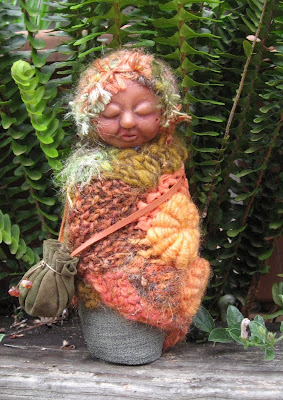 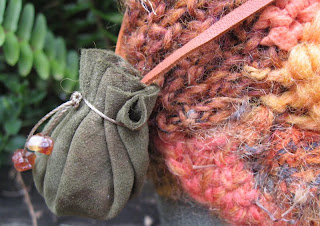 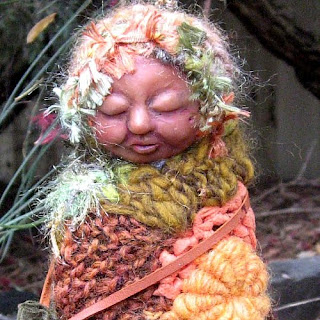 Remember to win the pink giveaway,  please leave a comment, before 9am, 2 November, about any of the photos or about Pink Ribbon Day and make sure I have your email details to contact you. Please support Breast Cancer Research. 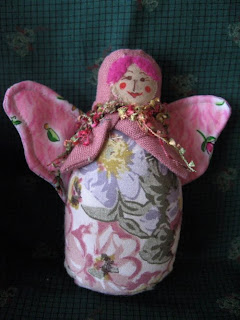 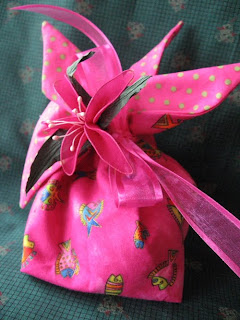 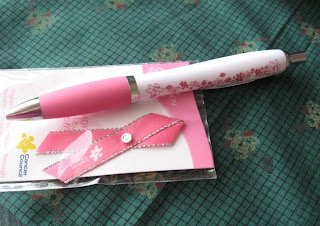 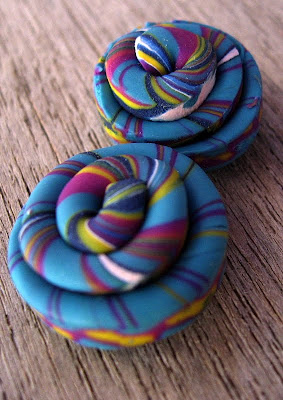 One day last week, I woke up early, and decided to play with some polymer clay . I had been intrigued for some time with stacker beads (ovenfried beads) and so tried to make some. I did eventually after many attempts, and was happy I had managed to get the technique right. Then, of course, I looked at the mess of reject clay I had from all of the failed attempts, so thought I should on the spot use the clay rather than store it, so I made lots more beads. So now I have lots of other beads just for two stacker beads. Some of my Dolly friends said they thought the beads made out of reject clay were just as good anyway. 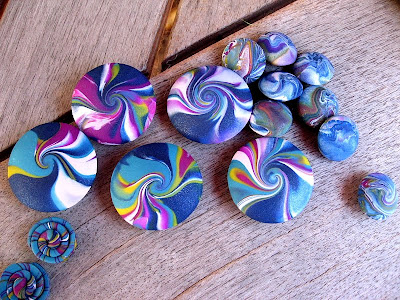 Besides clay play, it’s been a big week. My Rotary Club, the Rotary Club of Wallsend-Maryland, District 9670, held its annual community awards last Tuesday. Six people in the community were recognised for their service to the local community. My husband , Jim, was also presented with a “fun” award for services beyond the fall of duty , referring to his accident in Papua New Guinea while on a Rotary volunteer project. I now realise that this was a diversion so I wouldn't guess that he was also being recognised as a Paul Harris Fellow – a big surprise for both of us, but especially for Jim. Occasionally, Rotary Clubs recognise the service of non-Rotarians so our family feels very proud that he has been recognised for his untiring support for humanitatrian projects. The award reads ' in appreciation of tangible and significant assistance given for the furtherance of better understanding and friendly relations among peoples of the world.' Thank you to the many many Paul Harris Fellows around the world for their service to their communities. 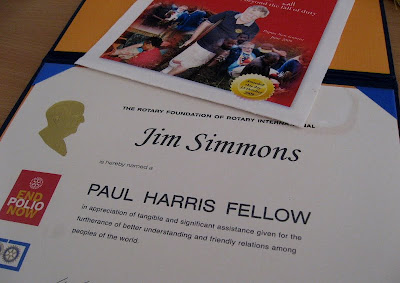 It was also Jim’s birthday last week, and a good time was enjoyed by all. 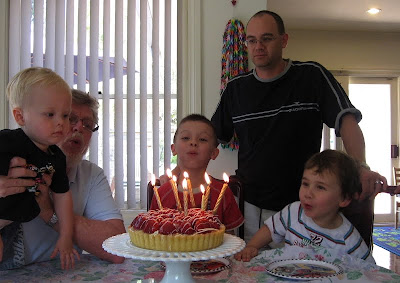 Posted by Wilma Simmons (Empress Wu Designs) at 11:18 AM 2 comments:

For some strange reason, I have been making quite a few things in pink in the last couple of weeks. This week I finshed a little felt face brooch and a polymer and silver necklace - all very girly and pink!  Perhaps my new granddchild due in December will be a girl?

The little brooch is made from a piece of handmade felt which I made while doing a demonstration at a workshop , and the spikey bits came later, again from a felting experiement. I put them together with one of the little faces I use for my Feltfollies, and here is a different look brooch.  The necklace heart pendant was designed to fit one of the little silver pieces I made when I was first learning to work with silver clay ( Precious Metal Clay - PMC). Then, I used to have bits of clay left from projects because of poor planning, and to practise, I used to make buttons or pieces I could use on dolls. This one didn't get that far and found its way onto a polymer clay shape.

Thinking Pink in October, however, is a good thing.  October is Breast Cancer Awareness Month and in a couple of weeks, Monday 26th October is Pink Ribbon Day.http://www.pinkribbonday.com.au/  If you haven't thought about it yet , please remember to buy pink merchandise from the Cancer Council campaign, hold a "Girls' Night In "to raise money for Cancer Research, or  just remember to take good care of yourself , book in your mammogram, and stay healthy.

With the October long weekend holiday and daylight saving adjustment, I have been working in a mind "fog" today, and kept wondering what I would write about in this blog this week... it was so obvious.

Last Friday I had the great privilege of attending a workshop conducted by visiting US master artist in Precious Metal Clay, Hadar Jacobson. Please see why I have been so excited about attending this workshop - please check out  Hadar's website. The workshop covered many new techniques for me and challenged the way I have previously thought about approaching, executing and finishing a silver project. I learnt new finishing techniques using a handheld rotary tool  and yesterday bought some new attachments for my dremel . My husband, Jim was really surprised when I got up early yesterday excited about going shopping at the local hardware store!

I made a small pair of hollow form earrings. In retrospect, I chose rather uninspiring shapes, but as this was the first time this year, I had even touched silver clay, I thought I should try to be a bit conservative. This was also the first time I had set a precious faceted gemstone into the silver, so I was really happy with the end result and have been happily wearing the earrings today.

It was also a great opportunity to meet up again with friends from the Contemporary Clay Instructors' Program a course which I completed  at The Eclectic Studio in 2007-2008.  It is also great to work with other "like minded" people - what a creative atmposphere!

Of course, I have now reignited my interest in working with clay. How many hours are there really in a day?