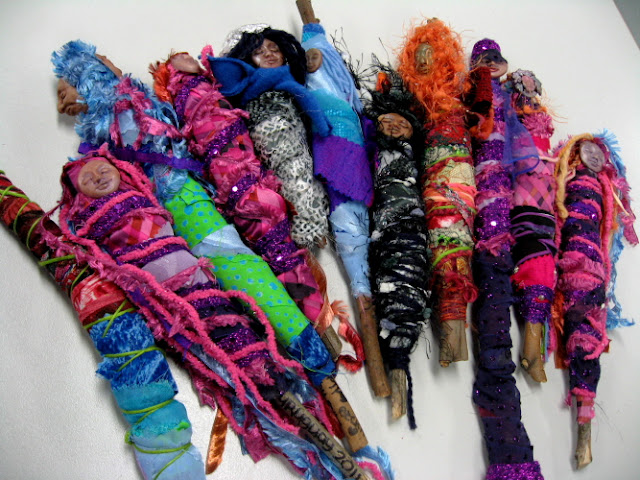 Is there any connection between student dollmakers and jam? I guess both can be sweet? The real connection is these were two of my activites this week.  I went back temporarily to high school teaching this week in inner Sydney, teaching in a Links to Learning program - a program essentially for high school students having some difficulties either at school and/or at home. Although I was a high school principal, I have always thought that schools are not always the best places for learning for everyone, so it was good again to teach outside a school setting and doing something involving personal development. We made wrapped stick dolls and it was designed to be both a fun  and serious exercise, with the girls writing personal messages inside the doll, and then wrapping them with fabric and embellishing madly. I thought the results were great, and the exercise uplifting for all of us. 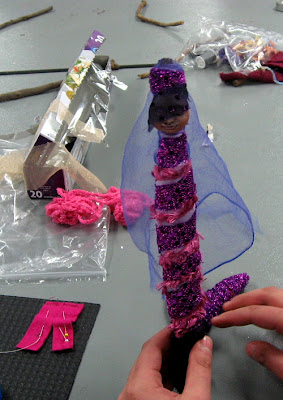 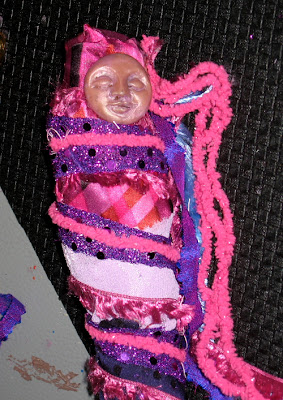 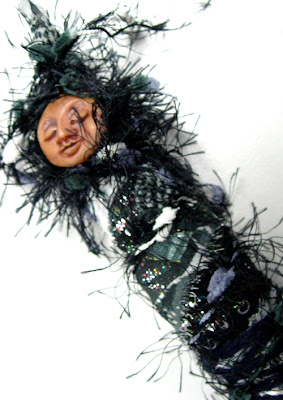 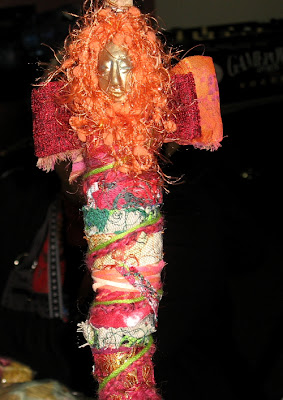 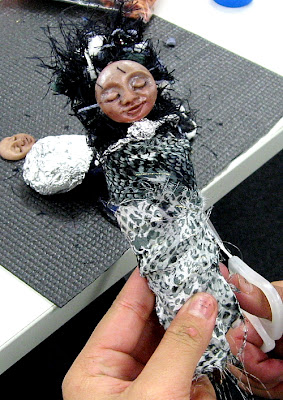 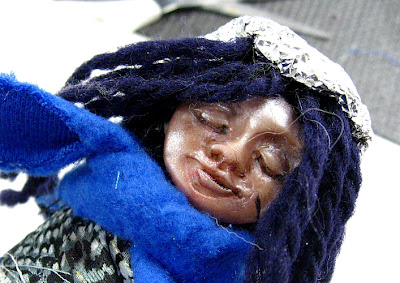 So, back at home, with an abundance of home grown mandarins from my sister-in-law's tree, I set out to look for recipes using mandarins. I found many including mandarin martinis, mandarin curd, mandarin syrup loaf, mandarin and chocolate muffins and a myriad of almond and mandarin cakes . However I settled for the "Exquisite Mandarin Jam" from Sally Wise on the ABC site. If you like the look of what I made ... here's the recipe. 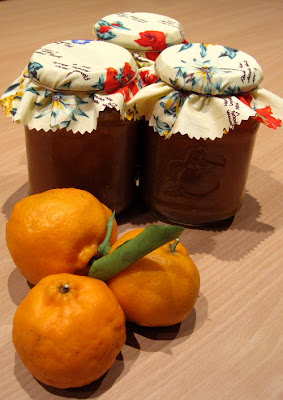 Degree of difficulty: Low
You need: 8 mandarins, Water, Sugar, Juice of 1 lemon (optional but advisable)
Method:
Place (whole) mandarins and lemon juice in a pot and barely cover with water. Bring to the boil and then simmer till mandarins are tender. Remove from liquid, then chop or puree. Return the fruit to the pot. Measure the fruit and water mixture, then add equal part of sugar. Bring back to the boil, stirring to dissolve the sugar. Boil till setting point is reached (about 20 minutes) - the seeds will rise to the surface during this time, so they are easy to remove. Pour into sterilised jars and seal when cold

Posted by Wilma Simmons (Empress Wu Designs) at 9:41 AM 2 comments: 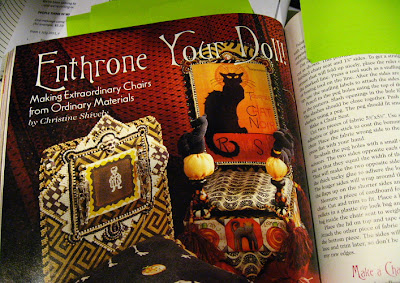 "Enthrone Your Doll" is the title of a project in an Art Doll Quarterly Magazine. I have been a fan of this magazine for a few years, and  religiously bookmark lots of projects and ideas in them.  Rarely do I try any of them. I was tidying up the other day, and saw all the bookmarks in so many magazines. I vowed I should do something about them. I came across this wonderful idea by Christine Shively in the Spring 2004 edition. 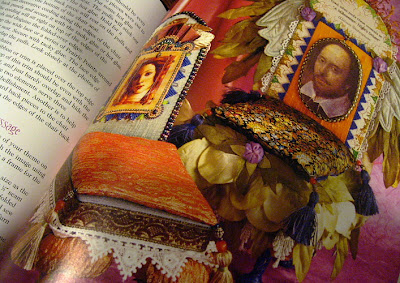 This was also timely as I have the last doll to work on in the round robin with a theme of Witches and Wizards.  My job is to embellish this doll, but there really wasn't much more to add . The doll arrived really completed and resplendent in reds and blacks. It's a pity I can't show the doll  to you yet, as it will be revealed in a fortnight's time. Earlier ideas of making a black cat, or a black raven as a companion were dismissed in favour of a chair. So,with red and black as my theme, I rummaged around in my work room  for beads, trims and fabrics and gathered other supplies -   recycled cardboard from a carton and  four wooden pegs. Then, with a bit of glue, paint and stitching, here is a "throne", fit for a "witch with attitude". 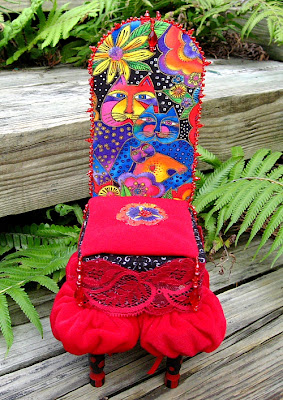 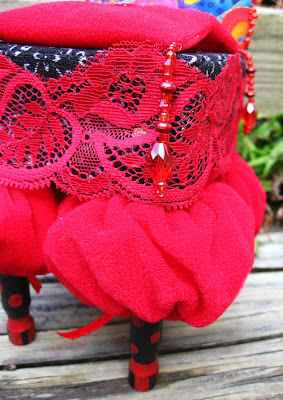 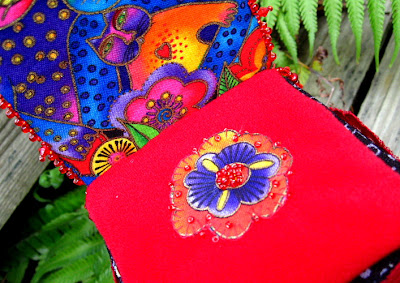 Until the doll can be displayed, a little felty friend is keeping the seat warm. 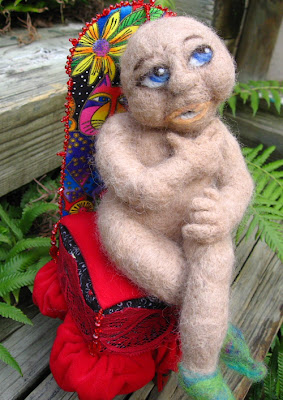 Friends at my other doll making group, Hello Dollies also liked this, and it may become a future challenge. Amazing what inspiration old magazines can provide!
Posted by Wilma Simmons (Empress Wu Designs) at 3:14 PM 4 comments:

Creative Tips of the Week

As the saying goes, you're never too old to learn something new - that includes tearing up bits of coloured paper! I am going to share some of the "tips" I picked up this week. None of them is related to one another, but I think perhaps at least one of these might be useful.
Tip 1:  Play with paper to refresh design ideas whether you usually work with paper, textiles, clay and /or mixed media. I attended a mini-workshop with Judy Hooworth (NSW textile artist) at the Newcastle Creative Embroiderers and Textile Artists . We started off with a postcard of someone else's art - I chose this one, called Pandanus and Pelicans Townsville Common by Sylvia Ditchburn , I have always liked the subject, the composition and the colours.


Then we enlarged the postcard to A4 size - black and white and made a tracing of the outlines on tracing paper. Here's the interesting investigative bit - divide the tracing in half both horizontally and vertically, and join up points of interest in the art. I was able to "grid" the image to work out how the art was composed.

We then interpreted the image with coloured paper and the last step was to " abstract" it. We then had lots of  design images to work from, using our cardboard frames and interpreting them  in our preferred media.
Tip 2:  In some cases, "uneven" is good! I had been wondering why my temari were not looking as good as some my mother had made .... This week, I bought a second hand book ( for just $3) and not only has it great temari patterns, it provided this tip - when winding the balls with thread as the base, do it as unevenly as possible, that is, no two threads should lie side by side. On closer inspection, I could see that there are  threads lying side by side on mine!  ( Perhaps this tip should have been search the internet for great bargains in second hand books!)

Tip 3:  Great jam drops have a secret! ! I heard this tip on the ABC Radio show, Australia All Over. When making jam drops, don't put the jam in before baking .... make the recess in the biscuits , cook for at least half the time, and then add the jam when the biscuits (cookies) are partially cooked. For all the years I have been baking biscuits, I had never heard this tip ( not even in the Country Women's Cookbook) and this week, I discovered it works. My family ate them all the same, but I thought they looked better!
Posted by Wilma Simmons (Empress Wu Designs) at 3:36 PM 1 comment:

The Wonders of Winter

We have had such a happy week in the wonderful part of the world we live in -  a day and night at Salamander Bay, about an hour's drive away from home.  One of the best spots to be in Winter!
The day was clear, cold and windy, but beautiful - perhaps not the description the owner of this washed up yacht might have used?
﻿Our garden at home is looking beautiful too with the bottle brush, dancing like red fairies in the strong winds,and our Robyn Gordon Grevilleas attracting birds, even in such gale force winds.
What about creative stuff this week? Inspired by the day at the Bay, I finally named a couple of my   embellished felt pouches " Bayside Blues' and " Nautilus"  ....
﻿
And our lovely garden prompted me to play with my new Inktense pencils. I only bought six pencils separately, rather than a set, just so I could experiment with them. I think I'll be buying a few more ... These samples were originally a grey on grey print cotton, firstly coloured with a light Dyna Flow wash, and then features picked up with the pencils. Very easy - just colouring in!


It was also our son's birthday during the week, so we had a great night celebrating with a family party. Mmm ... homemade paella with loads of fresh  mussels, calamari, prawns and fish - lovingly cooked by Jim, and I made and decorated party style cupcakes, and a mud cake birthday cake. All shared by our lovely family - nothing could be better.

It was a wintry week and perfect for working with wool. Amazingly, I finished a little jumper for my granddaughter before Winter is over. Robyn Alexander from Colour Streams has a beautiful series of needle felted handbags "Printemps" and while their name may suggest Spring, I have really enjoyed working on   "Ebony Rose " from this collection this week
I keep checking the calendar and yes it is July already - EOFYS celebrations (End of Financial year parties), Rotary clubs' changeovers, end of school term, school reports, and  grandchildren's dance concerts! Everyone seems happy this week for one reason or another. It was a busy week for me, but we fitted in an offbeat  movie about Empress Wu's court. The movie was "Detective Dee and the Mystery of the Phantom Flame". I am not sure if there is a name for a genre which is a mixture of Hecule Poirot and Kung Fu films, but it gets a good review.
Quite a week of Chinese history - we also went to a beautiful performance "The Last Emperor" by the Liaoning Chinese Ballet (choreographed by Ivan Cavallari). Perhaps it wasn't the best technical ballet performance, but Pu Yi's sad demise was retold with graceful athleticism and magnificent costumes in emotionally charged and hauntingly stark scenes. If you get a chance to see either the  film or the ballet, you'll enjoy it - both part of the celebrations of the Year of Chinese Culture in Australia.
Posted by Wilma Simmons (Empress Wu Designs) at 4:05 PM No comments: