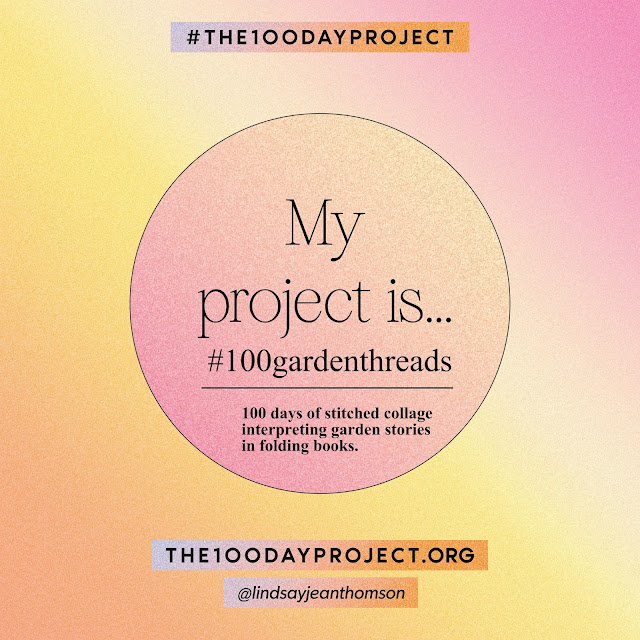 Having completed #the100dayproject in 2019 and 2020, I wondered if  I would do it again this year and thinking I had lots of time to think about it , I didn't think a decision would be imminent. And  surprise  - this year, the starting date was brought forward to 31 January - TODAY. I  hadn't really given it a lot of thought and there wasn't a lot of planning... However, I had decided I didn't want to go another 100 little things, but still wanted to feature the garden, or my neighbourhood somehow. Not to go into the long story  how many projects I thought of  and how many times I changed my mind, my project will be #100gardenthreads .   in many ways, this is not dissimilar to many of the other series of envelopes and  stitched pins  (#100envelopes and #100pinpoems ) . In this project, I am  using both meanings of thread
1) as in sewing - a fine fibre and
2) as in a book - its story or the way it develops , one part connecting to the other . 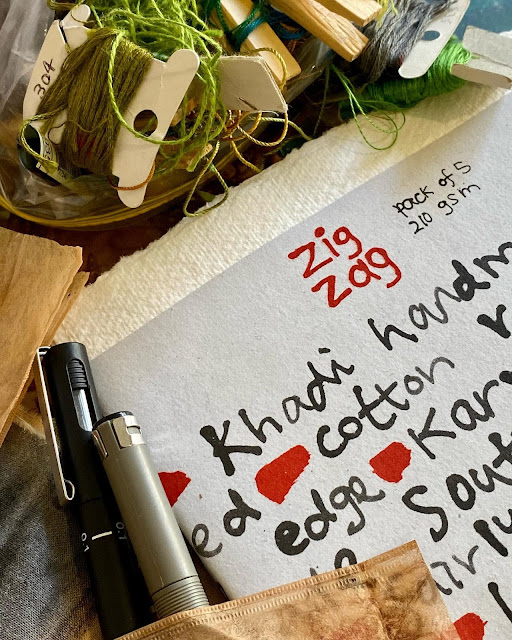 I have gathered 20 folding books - Zig Zag khadi paper books , each with 5 pages so the project will be a page a day . There will always be extra work every 6th day at the beginning of a new book - preparing the pages with a cloth cover first gives the paper more strength for stitching. 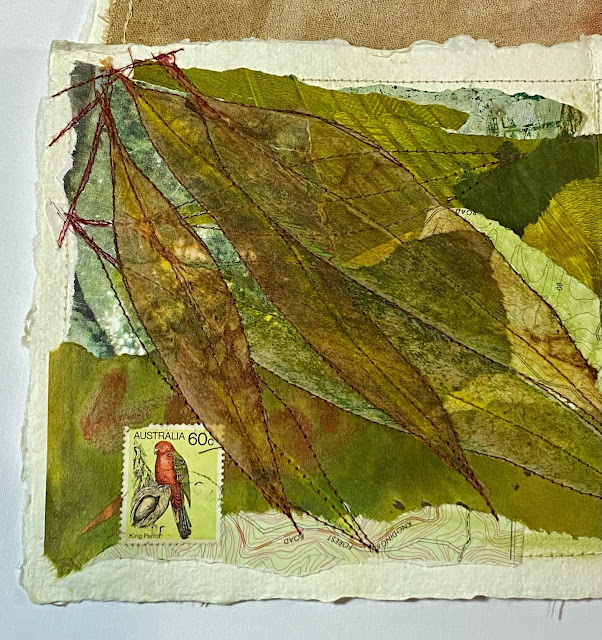 Today to ease myself into the project, I made a simple collage as in interpretation of the beautiful eucalypt tree ( ficifolia) in my garden . I have used a variety of papers including old maps, tea bags, painted and dyed paper and a postage stamp. 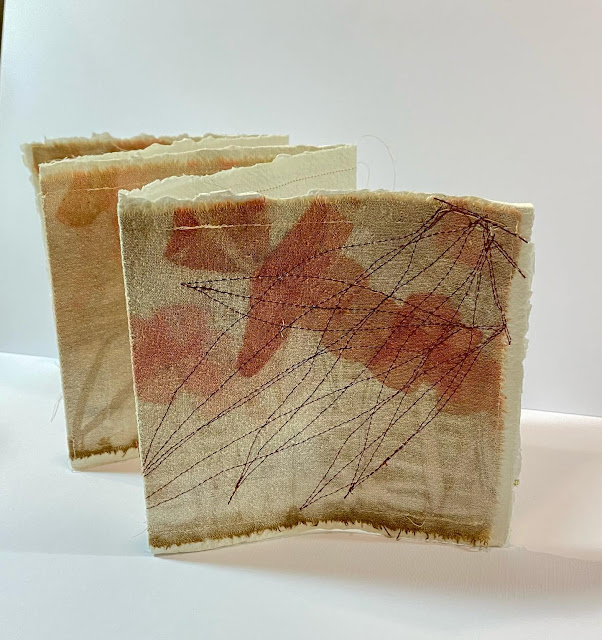 The cover and back of the book is eco dyed silk . Something I will need to consider as I go along is that whatever is stitched on one side also appears on the other if I work directly onto the pages. I didn't mind the outlines of the gum leaves on this first page and what is the front cover, although I may still add more to this "alternate' side. I also tried to continue one page overflowing onto the next , to add continuity - the 'thread' idea 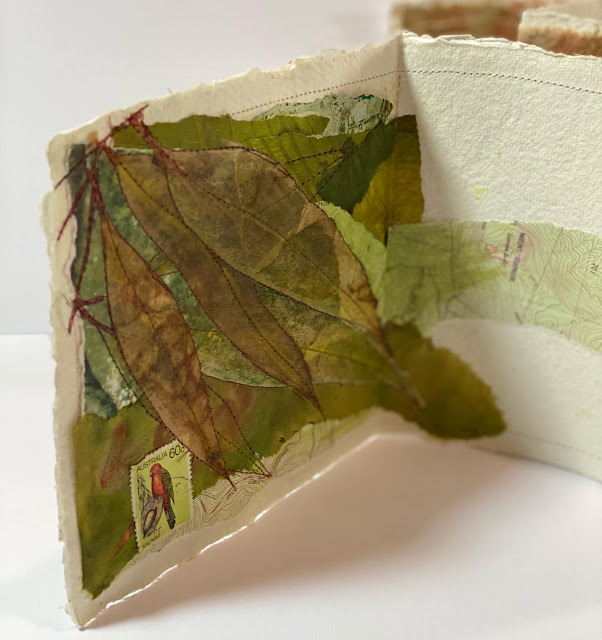 Hope you will follow my #100gardenthreads for the next 99 days. 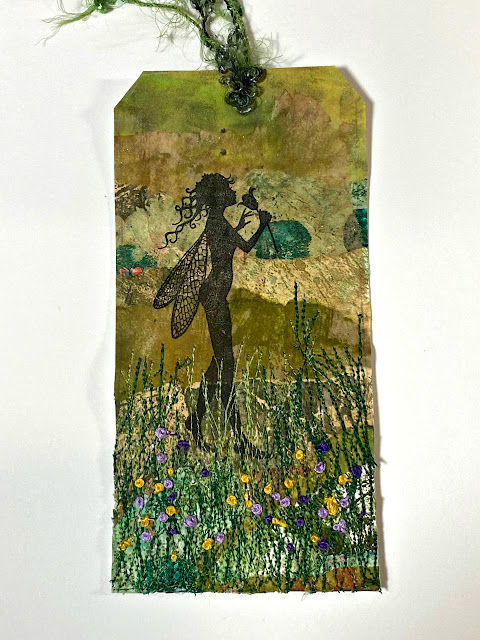 The stamp was on a tea bag, and is from an unknown source, 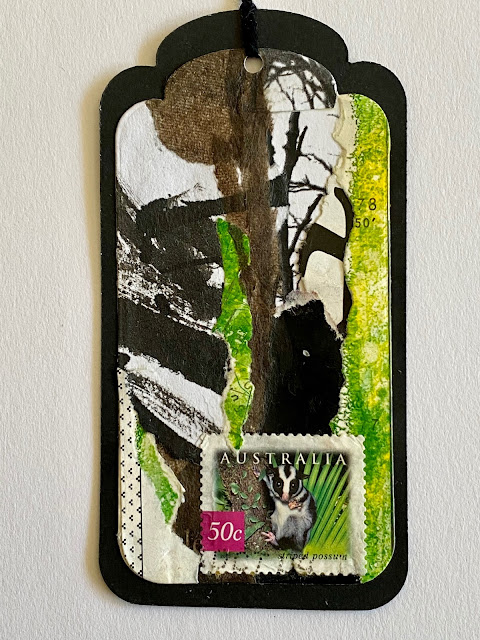 These days, I am always late to the Tag Tuesday party, but here are my offerings for the  current theme. NUMBERS . I have interpreted this theme fairly loosely....  in the above collaged tag,  there are very small numbers on the green paper section, which is part of an old map, so the numbers are reference points.  I am also counting the numbers on the postage stamp.  And likewise for the other two ...and I am sure you also  spotted 8 on the one below. 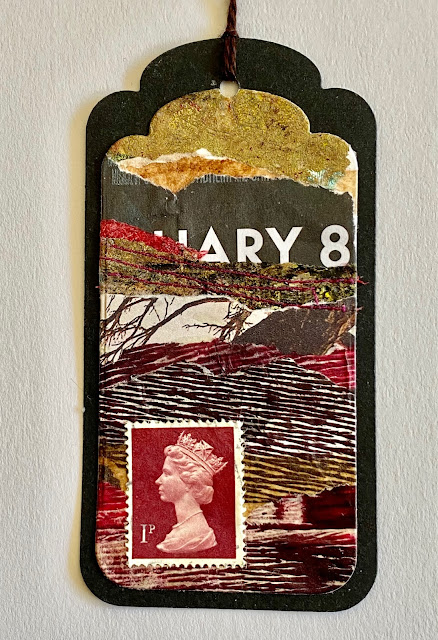 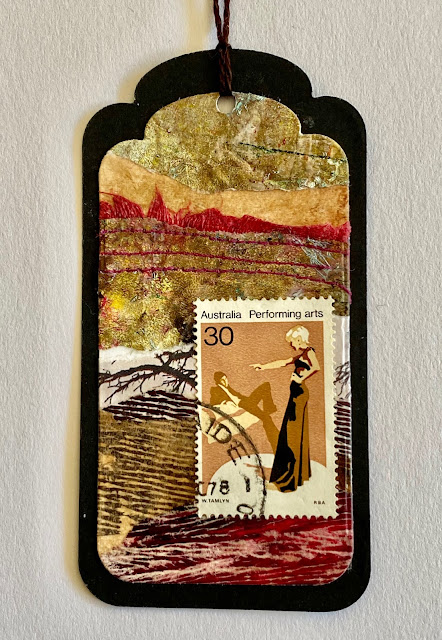 While I was creating these, I was thinking of other ways to interpret this theme, and I just couldn't stop remembering one of my favourite TV shows....  how would you have interpreted NUMBERS? 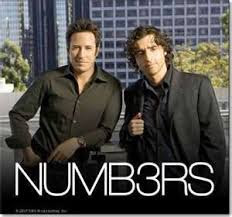 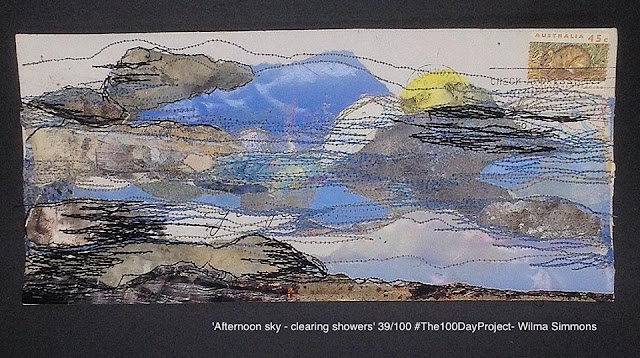 Today, we have had a grey day most unfitting for heralding a new beginning, but this afternoon, the skies are beginning to clear, just giving us a glimpse of better days ahead.

Did you know 1 January wasn't always the beginning of the year ?  The first time New Year's Day was 1 January was 45 BC , based on solar calculations instead of lunar cycles. 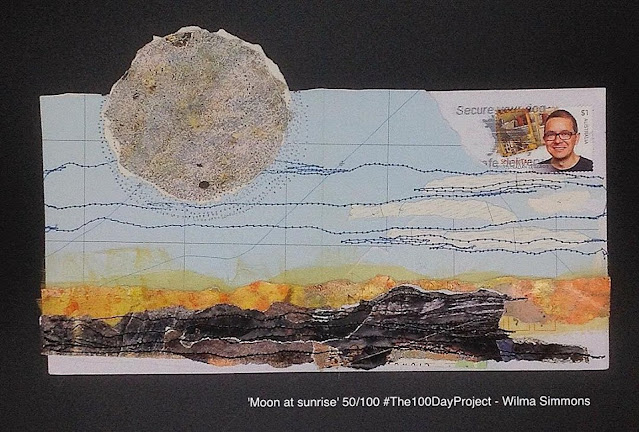 As the Roman Calendar needed reform, Julius Caesar enlisted the  experitse of an Alexandrian astronomer, Sosigenes,  who advised  ignoring  the lunar cycle  and  recommended  following  the solar year, as did the Egyptians. The year was calculated to be 365 and 1/4 days, and Caesar added 67 days to 46 B.C., making 45 B.C. begin on January 1, rather than in March. He also decreed that every four years a day be added to February, thus theoretically keeping his calendar from falling out of step. Even so, a slight miscalculation meant that by the middle ages,  an 11-minute-a-year error added seven days by the year 1000, and 10 days by the mid-15th century. 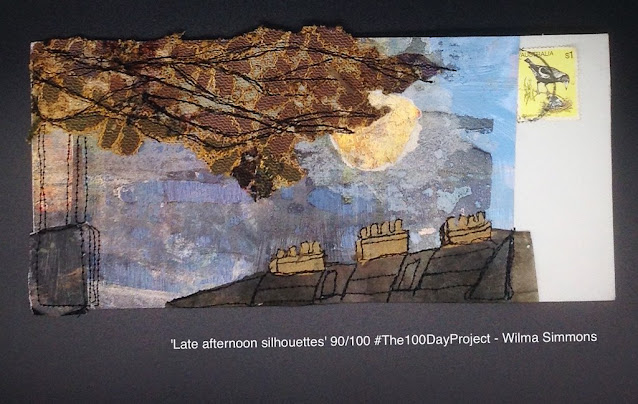 Enter  Pope Gregory XIII who commissioned Jesuit astronomer Christopher Clavius to correct the error and create a new calendar . In 1582, the Gregorian calendar was implemented, omitting 10 days for that year and establishing the new rule that only one of every four centennial years should be a leap year. Since then, people around the world have gathered en masse on January 1 to celebrate the precise arrival of the New Year. 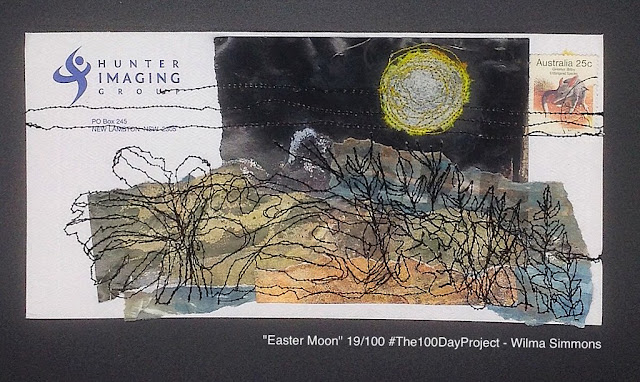 Of course for millions of people around the world, the lunar calendar is still observed. The lunar cycle, with the smooth and constant changing of the moon night to night, formed the basis of many of the world's traditional calendars. The most common lunar calendar is probably the Hijri (Islamic) calendar. Most are actually lunisolar calendars, meaning they're lunar calendars with some adjustments to match the seasons and the solar year. Some lunisolar calendars include the Hebrew calendar, the Chinese calendar, the Hindu calendar, and the Vietnamese calendar. The Islamic Republic of Iran also uses a modified version of the Islamic calendar which is lunisolar. In fact, because many Christian holidays are based off of Jewish holidays, most Christians also follow some lunisolar traditions...

Whether you follow the sun or the moon, may your year be bright with clear skies and visions splendid. 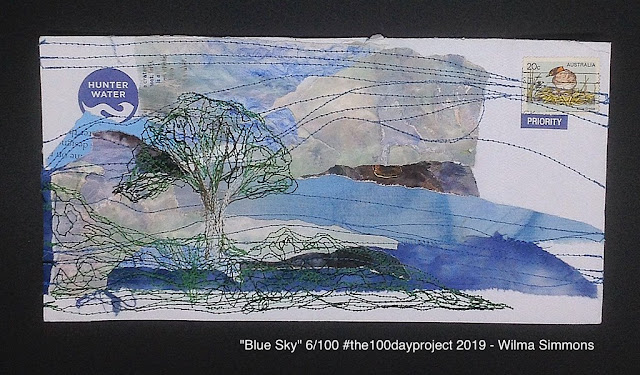