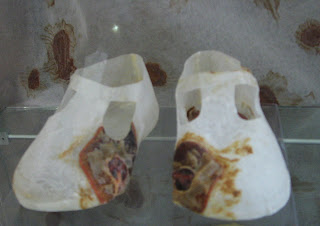 During a recent stay in (), I visited some “arty places. I was pleasantly surprised to find a small exhibit of the amazing work of textile artist, Jennifer Collier in the and Industry. Jennifer, who worked at the museum for two years under the Setting Up Scheme run by the Arts Council England North West, describes her technique “I create innovative textiles from natural and found materials such as leaves, petals fruit and tea bags …. The main technique I have developed is the fusing of fruit between layers of organza. This can be done with apples, strawberries, figs, pears, kiwis and cherry tomatoes.” 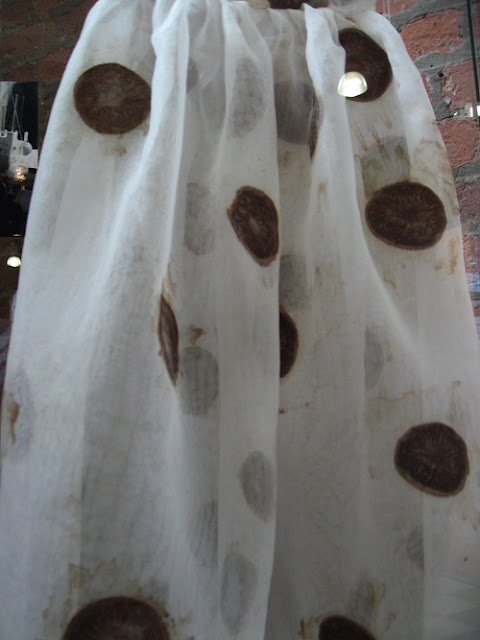 Of course there were other really interesting and engaging displays at this museum, including having your photo taken and becoming part of the electronic installation.

The Manchester Craft and Design Centre, in the Victorian market buildings, was such a vibrant creative place and its architecture of course was part of the charm. Each artist was housed in a working studio/shopfront - there was such a gentle energy about this  place. 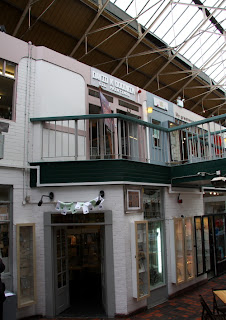 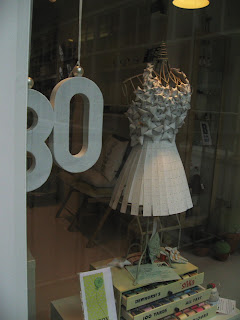 Here is a video which shows more of the work at  the Manchester Craft and Design Centre ...


A visit to the People’s  History Museum   is not only a wonderful social history lesson and appreciation of the contribution of working men and women and their families, but it has an amazing collection of handmade and handpainted trade union and working associations' banners.


The  museum   has now established a conservation studio, in an effort to preserve these colourful,  banners .  Formerly a hydraulic pumping station,  the museum tell the story of the history of  democracy in Britain  and about ordinary people’s lives at home, work and leisure over the last 200 years.  It  was really interesting to learn more about the fight for the women’s voting rights, especially from an ordinary housewife's 's viewpoint. Hannah Mitchell’s kitchen is reproduced in the museum, with genuine pieces belonging to her.
She belonged to the Women’s Social and Political Union and was arrested on one of her protests in , but her fine was paid promptly by her husband so she could return home to look after the family. Sustained by the belief in the cause for women, Hannah said “No cause can be won between dinner and tea and most of us who are married have to work with one hand tied behind us, so to speak”.
..... I feel very fortunate to live in times  and in a country when creative activities are a choice not a chore and freedom of speech is a "given" .... 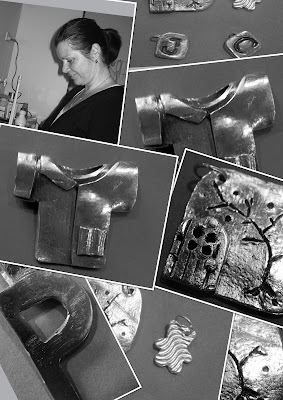 While our holidays have provided me with many blog posts yet to come, this week's "arty place" is at home, literally. Yesterday, once again our family room was transformed into a workshop area  for a Precious Metal Clay workshop for beginners . The photo shows some of the work, beautiful pendants - really fantastic, I think for beginners! 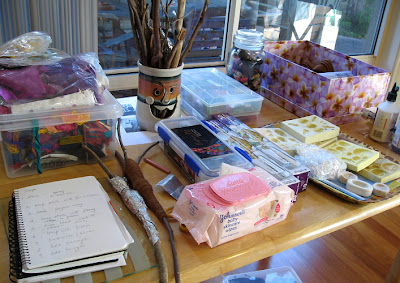 Recently most of the workshops here have been art dolls and this year many creations have been born here, during Wise Women workshops .... 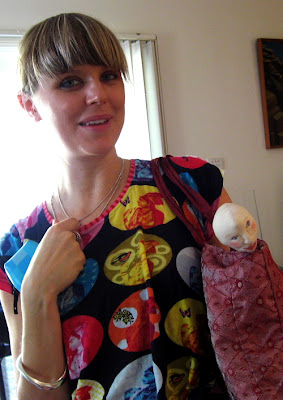 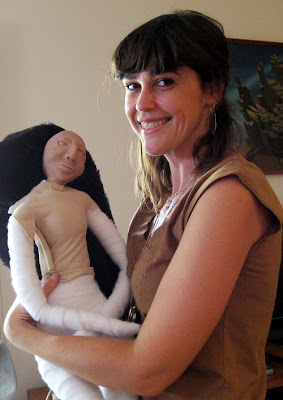 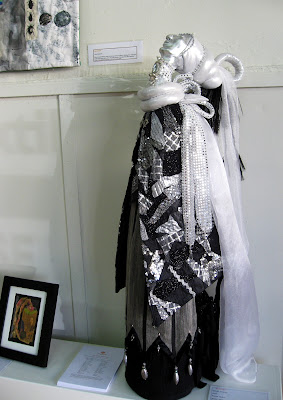 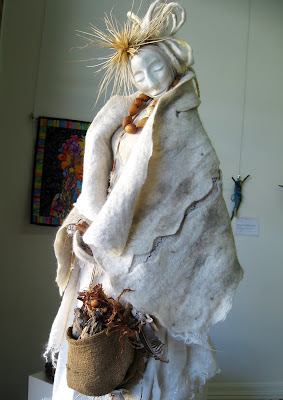 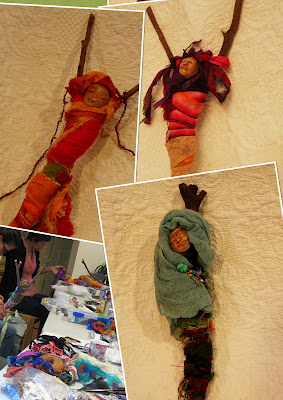 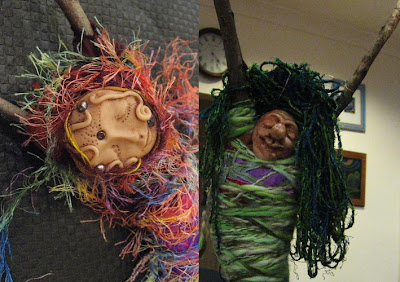 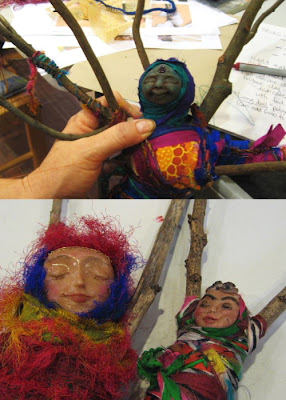 Even at family gatherings, there is always time for a workshop or two at Empress Wu Designs . Today we made polymer clay power rings and learnt to make swirl beads with scraps of polymer clay.  If you are interested in any of these workshops please check the workshop page or contact me directly. 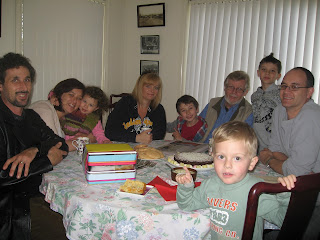 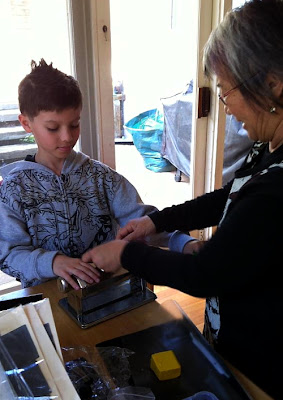 Posted by Wilma Simmons (Empress Wu Designs) at 12:56 AM 2 comments:


My husband’s grandparents were both English politicians.  Jim’s grandfather, Charles James Simmons represented various constituencies in the Birmingham area, and his grandmother  Florence Beatrice Simmons was an alderman in Birmingham City Council  in the 1940’s to 1950’s.( they were known as Jim and Beatrice). Their individual stories take more than a blog entry to cover – in fact, Jim’s (Charles James)  autobiography, The Soap Box Evangelist, tells his story while  he was a member of the  House of Commons  and a conscientious objector in khaki during World War 1. So, this blog post focuses on the fascinating story of their house at ( corner of and , Handsworth)  which we visited recently.
Known as the , the former  home of the Simmons family  is now a museum operated by the Handsworth Historical Society  It was once the Constable’s House, which also acted as an assize court ( periodic criminal court ). The house has been maintained not only because of its age and history  but especially because of its medieval architectural feature –  a cruck  oak timber frame construction.  What is a cruck frame? Basically, the frame is made of naturally curved timbers, but here is a better description of ….
There is no better description of the building itself as that of Mr. Bernard A. Porter,  who says in his notes for the Birmingham Architectural Association Survey in 1932:( from Handsworth Historical Society)
"This building is one of the very best early examples of the rare "CRUCKS" method of timber frame construction to be found in this country.
The writer had never read a description of a better one, nor has he seen one quite so good in drawings, or photographs, or by personal observation.  The curved oak timbers, forming the crucks, have never been cut to shape, the bend being perfectly natural, as the grain clearly shows, and the grain at the base is practically upright. The natural bend for so large a timber must be considered as very great, especially when it is remembered that the trunks of oak trees grow almost vertical.
The whole structure is known to have been originally one house - or Hall - and was erected about AD.1460. Much of the brickwork along the two sides is of more modern repair work, especially on the north side, which was the main front. The original brick filling was put in about 1625, when the structure is known to have undergone repairs, and the chimney against the east gable added.
The building is completely timber framed in every way, and walls and such like served no other purpose than as a filling to keep out the wind and the rain, or to screen one apartment from another.
It would appear to have always been a two storied building, Massive oak beams, eight, nine and eleven inches square, with moulded angles, span from timber frame to timber frame, and support the exposed and chamferred joists of the upper floor, and the ridge piece is of special interest as it is formed of an eight inch oak beam turned at an angle and lodged in a shallow notch at the meeting of the crucks which serve the purpose of principal rafters".
More interestingly perhaps are the stories about the house – Oliver Cromwell is said to have slept once in the front bedroom. There was supposed to have been a resident ghost, and a secret passage which none of Jim’s family remember. There of course,  Jim Simmons wrote his book and many a constituent came to to plead a housing cause with the Chairman of the Housing Committee, Beatrice Simmons.
What the Simmons’ cousins do remember is having to help their grandmother polish the horse brasses, and after school being allowed up to their grandfather’s office and lying on the chaise lounge falling asleep to the sound of him tapping on his typewriter keys.
My husband, Jim  was only three when his family left , so while he has few memories, the last photo of them all in was taken alongside the fireplace where his sisters were remembered for entertaining the family with little concerts on Boxing Day, for the traditional Simmons family get together.
We spent a really interesting, educational, uplifting and emotional day visiting Jim's grandparents' home, seeing the garden Jim's dad and uncles built, reliving special times with cousin Mark and his parents, Pete and Marie Simmons, learning more about family and social   history and  reconnecting with family. 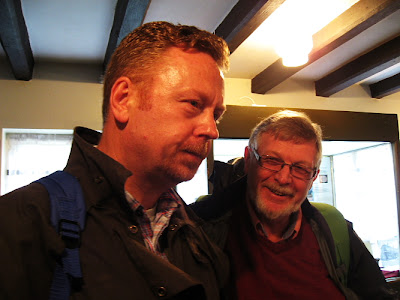 PS : I would be happy to hear from anyone who has a story related to this house, or has some recollection of the Simmons family who lived in Handsworth Brimingham.