Tag Tuesday's  current theme is ' Steampunk' and I am away from home and have limited resources and of course, no stash. However, I am travelling with water colour paper,  a black pen, some coloured pencils and a 2B and a 4B lead pencil.  I also have scissors so I cut out an advertisement for a watch from the in flight magazine and with the purchase of a glue stick and some string  , I created this interpretation of 'Steampunk'. I actually enjoyed working with so little at hand - sometimes it challenges you to think more and do something differently. 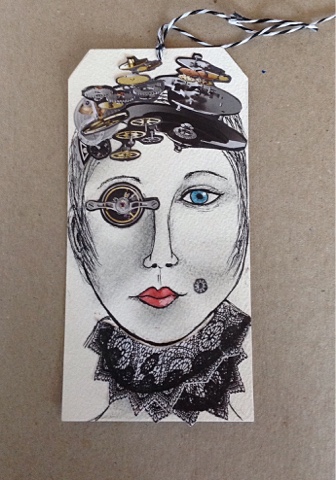 
In one of history's great migrations, more than six million people have crossed the world to settle in Australia.  At the Australian National Maritime Museum, the Welcome Wall stands in honour of all those who have migrated to live in Australia with names of individuals and families permanently engraved in bronze.
Located outdoors on the museum's northern boundary, the wall faces Darling Harbour and Pyrmont Bay where some of the many new settlers arrived.

Accessible all year-round,  it's lovely to stroll along the bronzed panels and learn more about the migration experience as well as reading the names engraved.
In 1950, my husband Jim was a three year old and he travelled on the SS Chitral with his mother and father, Rose and Don Simmons and his sisters Patricia and Christine from England to Australia. From the memoirs of Don Simmons :  " .... The families saw us off at Snow Hill Station, Birmingham. Rosie's dad rushed down the steps just as the train was pulling out. We were bound for London and the Tilbury docks. I remember little of what happened until  we boarded the P&O ship 'Chitral' on her final voyage.... The food and services were satisfactory. The journey took a full six weeks - largely due to a need to fix the engines in place... This caused a delay in Port Said and allowed me to see Pete ( Don's brother who was in Egypt doing National Service) ... I allowed us to be conned by a tout into making a trip by taxi to a native village. I can remember the hectic confusion and outright poverty of this place - the beggars and salesmen, dirt, flies, victims of elephantitis and bad smells. We retreated as soon as possible... We stopped at Colombo but couldn't afford to go ashore. We started out with about sixty pounds as I remember. The Indian Ocean seemed endless..."(Simmons, R.D.: Up There and Down Here, p65-66)
Yesterday on 10 September, 2017 ( approximately 67 years after leaving England), the Simmons family was acknowledged on the Welcome Wall. (There were two more children born after arriving in Australia and  it can be questioned, as Rose was pregnant with Susan when they left England, whether her name should appear there too)

The ceremony was very moving and especially significant for those whose names were unveiled yesterday like Jim and his sister Chris. Some of the stories of the families whose names are on the wall were told by descendants and the contribution by migrants to many Australian communities was recognized.
Yesterday there were about 300 names unveiled in the second of the ceremonies held this year and I too was fascinated to hear and read the stories of so many people from various parts of the world. I know a little about the stories of those who come from UK and China, but it was so interesting for instance, to hear about families from places like Malta and the Ukraine and why they decided to settle in Australia.
The Australian National Maritime Museum in Pyrmont, ( Darling Harbour) Sydney is a great place to visit. We particularly enjoyed the permanent exhibition, "Passengers" which brings to life the stories of migrants, their journeys, their struggles and their successes. 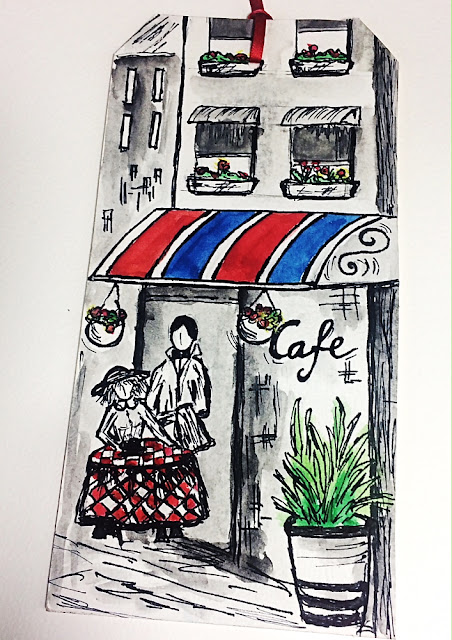 Here is another "Paris" tag for Tag Tuesday - a little sketch with  pen and watercolours.... nowhere in particular, but hopefully  it is reminds you of a Parisian cafe...  Remember to check out all the links to fantastic tags from the  Tag Tuesday site
Posted by Wilma Simmons (Empress Wu Designs) at 10:32 PM 4 comments: 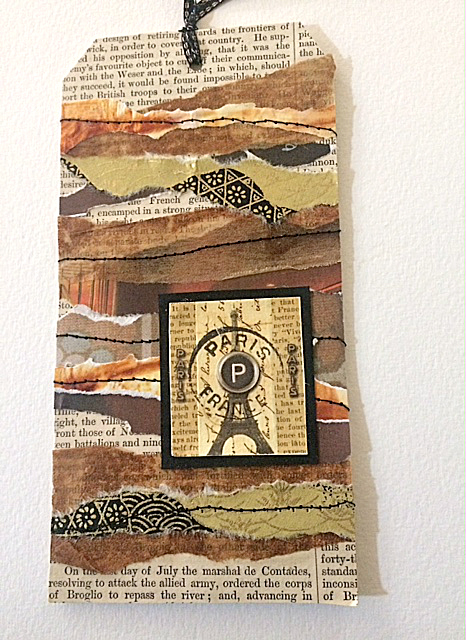 Tag Tuesday is still one of my favourite online blog groups, although I have been slack and haven't posted for a few weeks. The theme this fortnight is  "Paris" chosen by Wendy, one of the  talented TT Design Team. My offering for this theme is very simple - torn paper ( my current passion) and a "Paris" image to offer context to the textures in the layers of papers I have recycled. I don't think this perpetuates the romantic image of Paris so much as it  tries to convey the history of the buildings of  Paris.  I have added more photos of my torn paper collages also completed while I did the Paris tag, as I simply cannot stop at one, once I start tearing up bits of paper. 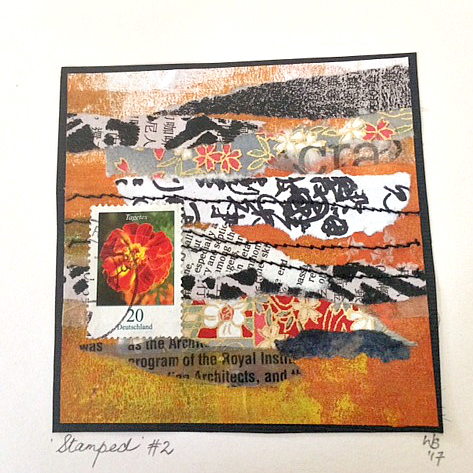 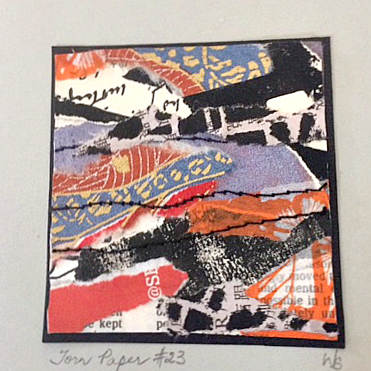 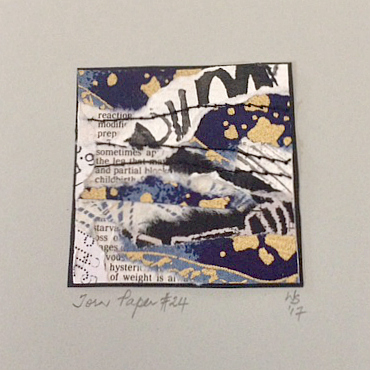 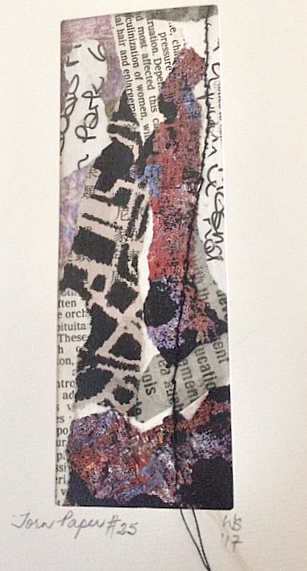 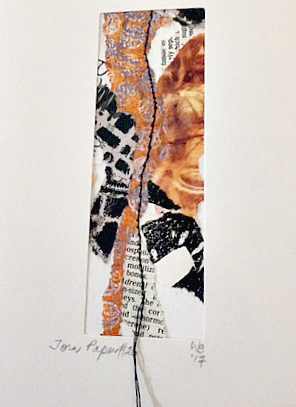 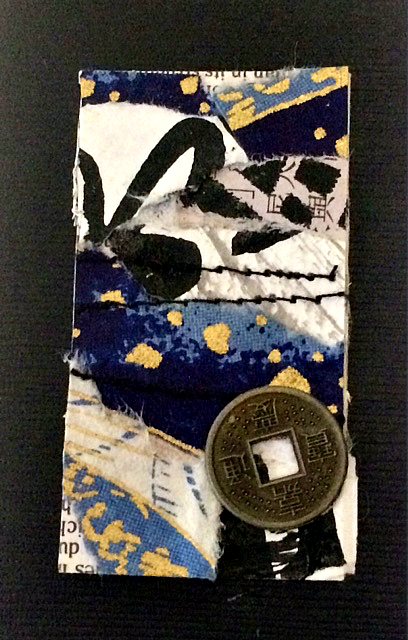 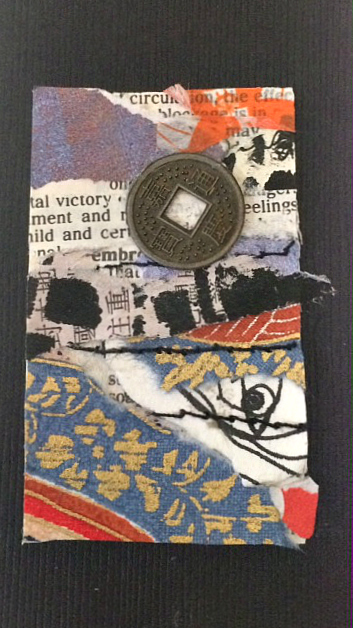 The Mother of Father's Day 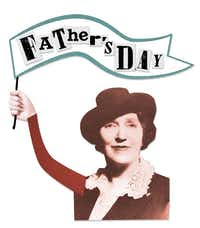 Today we are celebrating Father's Day in Australia.. lots of families enjoying the day out or  BBQs at home,  lots of presents like " Best Dad" coffee mugs, chocolates, socks and undies ... so how did all this begin? The first Father’s Day was reported  in Washington , USA on June 19, 1910. A woman  Sonora Smart Dodd came up with the idea of honouring and celebrating her father while listening to a Mother’s Day sermon at church in 1909. She felt as though mothers were getting all the acclaim while fathers were equally deserving of a day of praise.Sonora’s dad was quite a man. William Smart, a veteran of the Civil War, was left a widower when his wife died while giving birth to their sixth child. He went on to raise the six children by himself on their small farm in Washington. To show her appreciation for all the hard work and love William gave to her and her siblings, Sonora thought there should be a day to pay homage to him and other dads like him. She initially suggested June 5th, the anniversary of her father’s death to be the designated day to celebrate Father’s Day, but due to some bad planning, the celebration in Spokane, Washington was deferred to the third Sunday in June. Here's a video about Father's Day
Since then other countries also picked up on the idea of Father’s Day. While many followed  by celebrating it on the third Sunday in June, some decided to make Father's Day a different date. 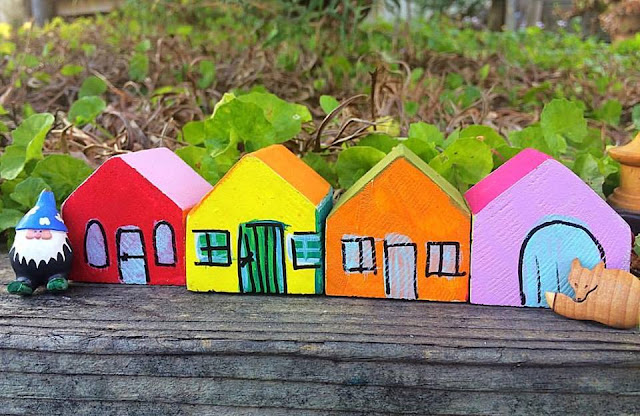 Whatever time of the year,  hope fathers and father figures everywhere enjoy a special celebration with their families.
Posted by Wilma Simmons (Empress Wu Designs) at 3:33 PM 2 comments: 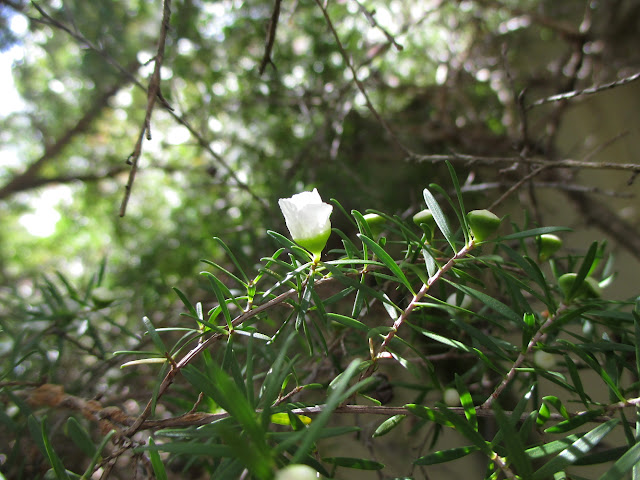 Today is the first day of Spring in Australia and somehow, psychologically, it has put me in a better mood. I've opened the windows to let the sunshine in the house and declared that we will no longer be sick ( having had a couple of weeks of colds and flu).  I've been out in the garden this morning, celebrating the new season. 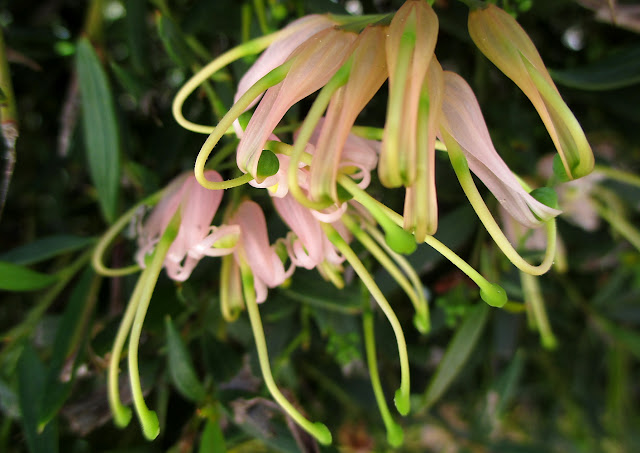 Spring euphoria is not an illusion — it can be scientifically explained. 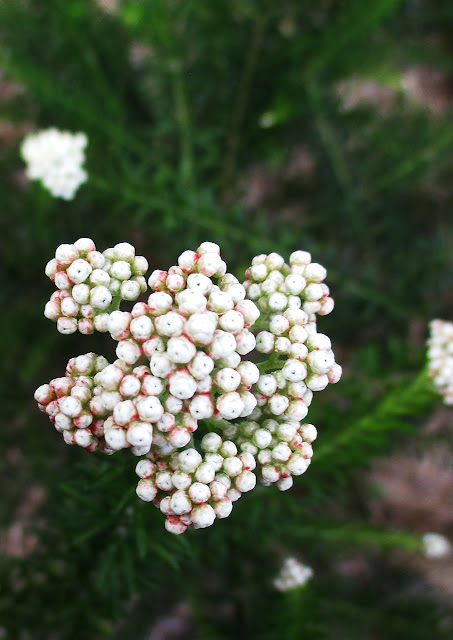 Three German researchers in different disciplines were asked to describe the relationship between good weather and  happy moods. ( from   World Crunch ) 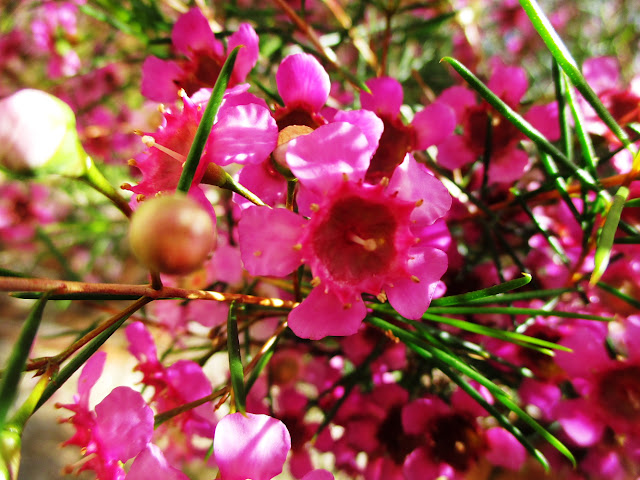 The psychologist. Human beings are programmed to rest when it’s dark, and to be active and in high spirits when it’s light, says Peter Walschburger, professor emeritus of biopsychology at the Freie Universität Berlin. “We react massively to light,” so conscious experience and human behavior change radically on fine spring days.
Scents and bird song also influence us, Walschburger says. 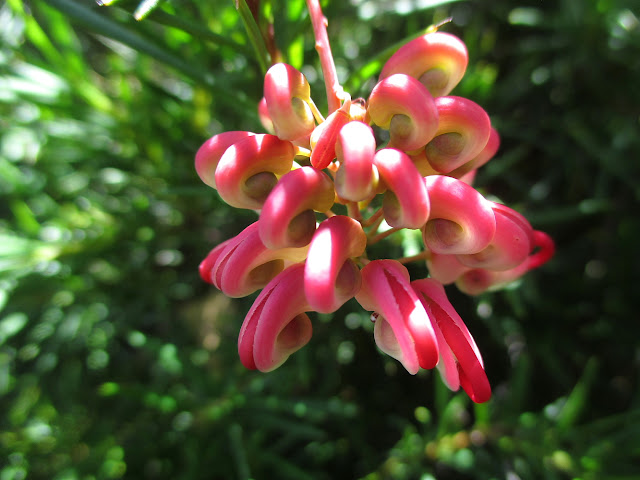 The endocrinologist. Sunshine changes our hormonal balance. Hormones that have a particularly strong influence on our moods are the sleep hormone melatonin and the happiness hormone serotonin, explains Helmut Schatz, spokesman for the German Society of Endocrinology. 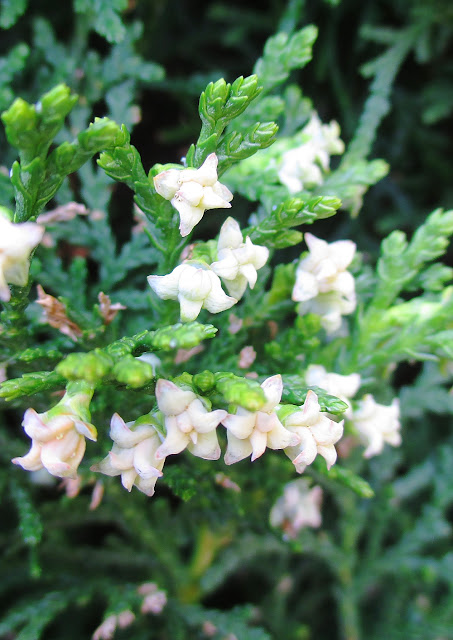 When it gets light earlier and the sun shines more strongly, more light hits the eye. Thus the pineal gland — sometimes called the third eye — sends an order to the brain to lower melatonin production, “which makes us more lively.” 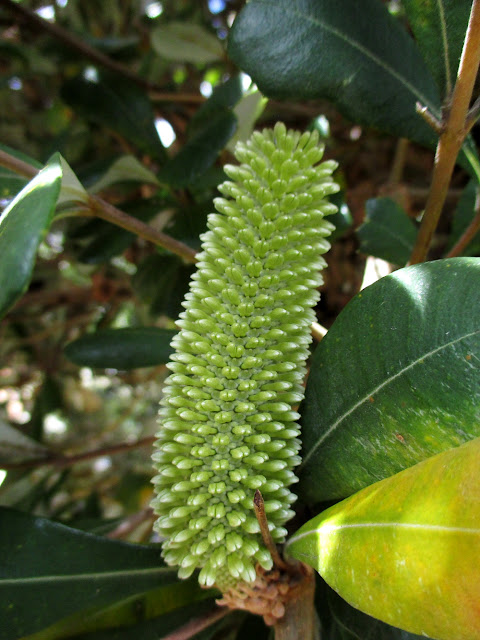 The doctor. People are sensitive to weather and always have been. “It’s in our genes, it’s ancient,” says medical meteorologist Gerhard Lux of the DWD weather service. Though our wellbeing in no longer weather-dependent — because of air-conditioning and heating — the weather still influences us. 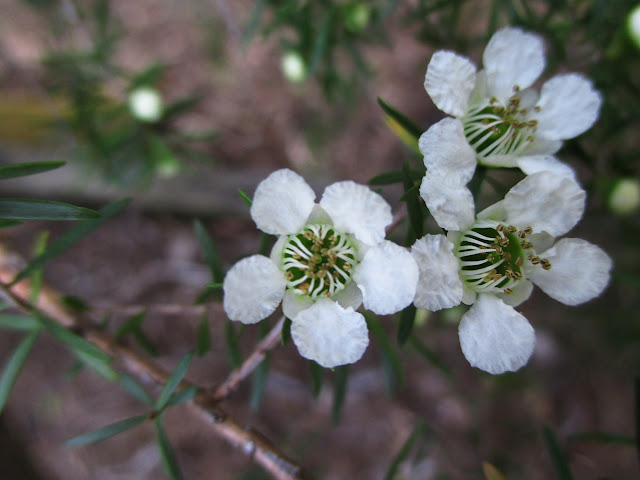 In spring, both the sun’s rays and a seasonal rhythm are responsible for a spring in our steps.  In principle, it’s a positive sign,  when the body reacts positively to a beautiful day, he says. “It’s a sign that things are in good working order.” 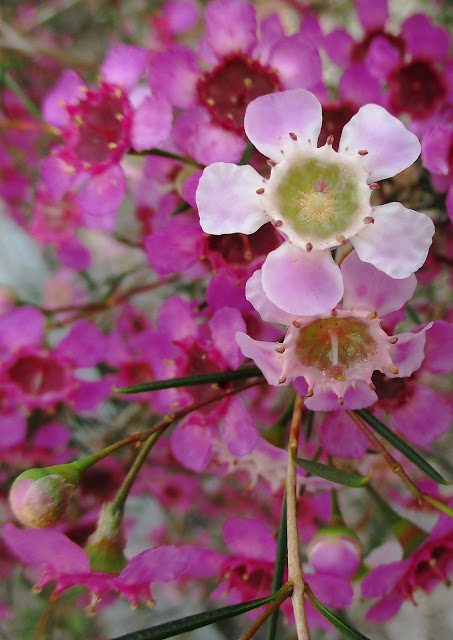 I hope the photos of Spring in my garden have also improved your mood today.
Posted by Wilma Simmons (Empress Wu Designs) at 2:13 PM No comments: