This tag was created with the theme "Africa" in mind. The khadi(cotton)  paper has been dyed with rooibos tea bags. Many of you may already know about rooibos tea , but if you don't here is some information straight from Wikipedia....
Rooibos (Anglicized pronunciation: /ˈrɔɪbɒs/ roy-bos; Afrikaans pronunciation: [rɔːibɔs],) means "red bush";  is a broom-like member of the legume family of plants growing in South Africa's  natural shrubland.  Its scientific name is  Aspalathus linearis . The leaves are used to make an herbal tea called Rooibos, bush tea (esp. Southern Africa), or simply rooibos. The product has been popular in Southern Africa for generations and is now consumed in many countries.
I used a permanent ink pen to draw the Adinkra symbol and to write the story explaining the symbol. The tea bag tag didn't have any markings on it, so I stamped a pattern, which I think looks a little African.
Posted by Wilma Simmons (Empress Wu Designs) at 11:38 AM

"Temari Or Not Temari?" Tutorial 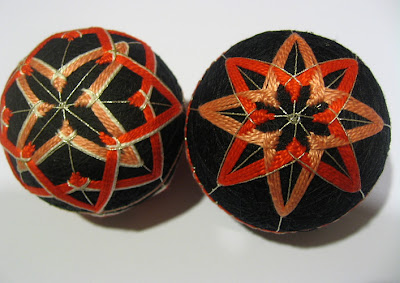